SAN DIEGO. (KGTV) — The suspected shooter in the death of a University of Arizona professor has a troubled past in San Diego.

46-year-old Murad Dervish was arrested 120 miles away from the university after allegedly walking into a campus building and shooting Professor Thomas Meixner.

Dervish’s family told KGTV he has a history of violence.

Court documents reveal a woman filed a restraining order against Dervish in 2020, stating he harassed and stalked her while he was a teaching assistant at San Diego State University.

An SDSU spokesperson confirmed Dervish was a graduate student in physics in 2018. He served as a teaching assistant during that time. Dervish was last enrolled in the Spring semester of 2020 and did not graduate from SDSU.

The woman was a student at the time. She stated Dervish would constantly send her emails and reach out through social media despite her telling him to leave her alone.

She also said Dervish disregarded the no-contact order she had in place through the university.

Dervish’s father, Dolgun, admits his son has a history of violence.

“My initial reaction was I’m sorry that he killed someone,” Dolgun said. 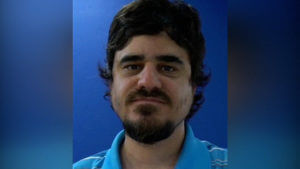 Dolgun, who lives in South Carolina, said several years ago, Dervish assaulted him at his restaurant.

“He smashed the equipment I had in my restaurant with a crowbar and then he threw a plate at me and hit my back,” he said.

Afterward, Dervish moved to San Diego to live with his mother.

“He tried to kill his mother there,” he said.

Dolgun said he was arrested, but eventually released.

He added he hasn’t been in contact with his son in a long time but believes that prison is where he needs to be.

“I’m so sorry this had to happen,” Dolgun said. “I was hoping that he would go to prison for a long time for some other reason than killing somebody.”

This story was originally published Oct. 6 by KGTV in San Diego, an E.W. Scripps Company.