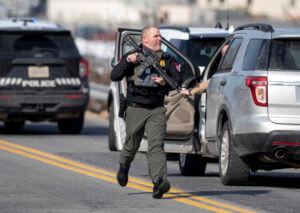 Police form a perimeter on Airport Road south of the North River in Bridgewater, Va., during a manhunt following a shooting at Bridgewater College Tuesday, Feb. 1, 2022. (Daniel Lin/Daily News-Record Via AP)

The college sent out a follow-up tweet about 2 p.m. saying police had apprehended a suspect after searching the campus but that students should continue sheltering in place.

A news photographer captured an image of the apparent suspect being arrested, laying face-down on the ground as more than a half-dozen law enforcement officers approached with guns drawn. The college gave the all-clear about 4:30 p.m.

No other injuries were reported.

At a news conference Tuesday night, Virginia State Police spokeswoman Corinne Geller said that the shooting happened shortly after the campus officers responded to reports of a suspicious man on campus around 1:20 p.m. She said that after a brief interaction, the man opened fire on the officers, shot them and fled on foot. The two officers succumbed to their wounds on the scene.

Officers from state and local law enforcement agencies then joined the search and found the suspect off campus. He waded into a river and was taken into custody on an island in the river., they said. 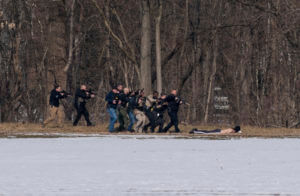 Police approach a person of interest on the south bank of the North River in Bridgewater, Va. following a shooting at Bridgewater College Tuesday, Feb. 1, 2022. (Daniel Lin/Daily News-Record Via AP)

The suspect, 27-year-old Alexander Wyatt Campbell, was treated for a gunshot wound that wasn’t life threatening. Geller said that it wasn’t clear if he received he wound in an exchange with police or if it was self-inflicted, and he was given treatment for it.

Campbell was being held without bond on two counts of capital murder, one count of first degree murder, and one count of use of a firearm in the commission of a felony, according to a Virginia State Police news release.

His last known address was in Ashland, Virginia.

Geller said she didn’t know if Campbell had a lawyer who could speak on his behalf.

A statement from school president David W. Bushman identified the two officers as campus police officer John Painter and campus safety officer J.J. Jefferson. He said that the campus was mourning the loss of the well-known and well-loved officers. Saying the pair was known as “the dynamic duo,” the statement noted that Painter was the best man at Jefferson’s wedding this year.

“Two members of the Bridgewater College family were senselessly and violently taken from us. The sadness is palpable. Words are not adequate, not nearly so, to express the grief, sadness, fear and — justifiably — the anger we all feel,” Bushman added. 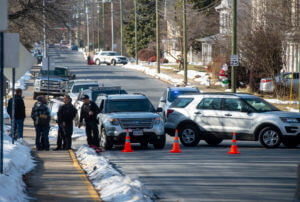 Virginia Gov. Glenn Youngkin ordered flags across the state be flown at half-staff Wednesday to honor the officers.

“My heart is broken tonight by the tragic loss of two officers at Bridgewater College today … The First Lady and I ask Virginians to keep their family, friends, and the Bridgewater community in your thoughts and prayers during this difficult time,” he said in a statement.

Bridgewater College is a private liberal arts college located about 125 miles (200 kilometers) northwest of Richmond. Historically affiliated with the Church of the Brethren, the school had an enrollment of about 1,500 full-time students in the fall of 2021, according to its website.