RALEIGH, N.C. (AP) — The 15-year-old accused of a shooting rampage in North Carolina’s capital city that left five people dead last week was found with a handgun and a shotgun when he was arrested, authorities said Thursday.

More details about the shooting emerged from a publicly released four-page preliminary report that Raleigh’s police chief delivered to the city manager. Such summaries are written within five business days of an officer-involved shooting. 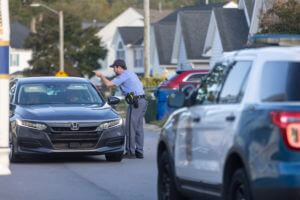 Raleigh Police direct a motorist on Castle Pines Drive in the Hedingham neighborhood on Friday, Oct. 14, 2022 in Raleigh, N.C. Police say a 15-year-old boy fatally shot at least two people in the streets of a neighborhood in North Carolina’s capital city, then fled toward a walking trail, where he opened fire, killing and wounding others. (Robert Willett/The News & Observer via AP)

The victims in the Oct. 13 shooting include the suspect’s 16-year-old brother and an off-duty city police officer who lived in the Hedingham neighborhood where the shootings began. Two others were wounded, one critically.

Witnesses described a shooter wearing camouflage and firing a shotgun in the attacks in the subdivision and on a nearby walking trail.

Police said the suspect — identified by his parents earlier this week as Austin Thompson — was captured more than four hours after the shootings began. Thompson was hospitalized in critical condition after his arrest. The top local prosecutor has said the suspect will be charged as an adult.

A service was scheduled Thursday evening for the suspect’s brother, James. The parents of the two teenagers released a statement earlier this week saying they are “overcome with grief” and saw no warning signs that “Austin was capable of doing anything like this.”

Services were set for Saturday for Gabriel Torres, Raleigh police officer who was off duty when he was shot, and Susan Karnatz. A citywide “Raleigh Healing Together” vigil was planned for Sunday downtown.

The Associated Press generally does not name people under 18 who are accused of crimes, but is identifying Austin Thompson because of the severity and publicity of the shootings and because his parents voluntarily named him.