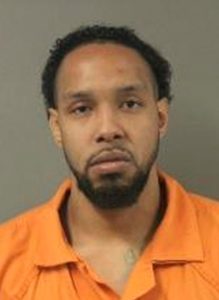 FORT DODGE, Iowa (AP) — Police say a man killed his ex-girlfriend’s mother at an Iowa home about an hour after officers went to the apartment following a reported assault but left without making an arrest or removing anyone from the tense scene.

Mark Russell, of Fort Dodge, is accused of using a golf club to beat 45-year-old Angela McLeod to death. Russell, 28, is scheduled to appear in court Jan. 31 on a first-degree murder charge. Webster County court records don’t list the name of an attorney who could comment for him. He’s being held on $5 million bail.

Officers were called to McLeod’s daughter’s apartment in Fort Dodge on Monday morning and heard contrasting accounts from McLeod and Russell about the reported assault, police said in a news release Tuesday. McLeod had been staying at the apartment with her daughter, but it was not Russell’s home, Webster County prosecutor Ryan Baldridge said.

Baldridge said Russell used to be in a relationship with McLeod’s daughter.

“It was apparent that Mr. Russell and Ms. McLeod had been in an argument, but it was impossible for those officers to determine fault or who the initial aggressor was,” police said.

Russell and McLeod told the officers that they could resolve their problems “without the need for criminal charges,” and neither woman asked that Russell be forced to leave.

“While it’s impossible to know what will happen in the future between any individuals, with no evidence of a physical assault and no third-party information, officers had no choice but to allow Mr. Russell and Ms. McLeod to carry on throughout their day, with both parties agreeing to work past their differences,” police said in the release.

Officers responding to another report about a dispute at the home about an hour later found McLeod unresponsive, police said. She was pronounced dead at the scene. Russell later told officers that he had repeatedly struck McLeod with the golf club.

“We don’t see anything that has raised any red flags,” Gruenberg said Wednesday, adding that the Webster County attorney’s office hasn’t expressed any concerns either.

AP’s efforts to reach McLeod’s daughter have been unsuccessful.

Russell has been imprisoned at least three times since 2012, police said. His criminal history includes convictions for illegal weapons possession and domestic assault, although the victim in that case wasn’t McLeod or her daughter.