Mourners carrying bouquets stood in a long line Friday to lay flowers and pray at a table outside of a railway station in Nara in western Japan. Some observed a moment of silence in the late morning around the same time the suspect fatally shot the country’s longest-serving prime minister, whose ultra-conservative stances on security and wartime history have divided views in and outside Japan. 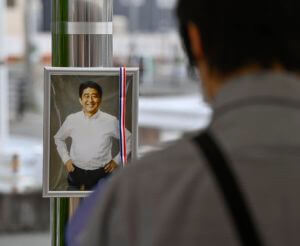 A photo of former Japanese Prime Minister Shinzo Abe is displayed at a memorial area near the site where Abe was fatally shot in Nara, western Japan Friday, July 15, 2022. Many people mourned the death of Abe at the site where he was gunned down during a campaign speech a week ago Friday, shocking a nation known for its low crime rate and strict gun control. (Kyodo News via AP)

A team of National Police Agency investigators on Friday inspected the shooting site, a day after Prime Minister Fumio Kishida blamed “problems with the security measures” for the death of Abe.

Photos and videos of the shooting show the alleged gunman was able to approach Abe from behind, while security guards were focused towards the front.

Tomoaki Onizuka, head of Nara’s prefectural police headquarters, also prayed for Abe on Friday and inspected several bullets that had penetrated the wall of a nearby building, apparently after narrowly missing the former leader or anyone else in the area, officials said. Onizuka has said security problems during the attack were “undeniable.”

The alleged gunman, 41-year-old Tetsuya Yamagami, was arrested immediately after the shooting and is being held for questioning for up to three weeks as prosecutors decide whether to press murder charges.

Police said the suspect told investigators he killed Abe because of rumored links between the former prime minister and “a religious organization,” which media reports identified as the Unification Church. The suspect was reportedly upset because his mother gave some 100 million yen ($720,500) in donations to the religious group, bankrupting their family.

Iwate Governor Takuya Tasso, a former diplomat and parliamentarian, told reporters Friday that the governing Liberal Democratic Party’s connection to the Unification Church, which is known for collecting large donations that are used to influence voting and national policies, should be investigated. 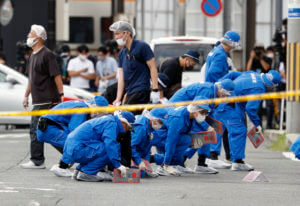 Police inspect the site where Japanese former Prime Minister Shinzo Abe was fatally shot in Nara, western Japan, July 8, 2022. Many people mourned the death of Abe at the site where he was gunned down during a campaign speech a week ago Friday, shocking a nation known for its low crime rate and strict gun control. (Kyodo News via AP)

The suspect’s troubled past and more chilling details of his preparations in the days leading up to the assassination emerged.

On Friday, Japanese media quoted Yamagami’s uncle, whose name was not released, as saying that the suspect’s mother joined the church in 1991, several years after the death of her husband. When his mother filed for bankruptcy in 2002, putting the suspect’s siblings in financial difficulty, Yamagami tried to kill himself to get death insurance to help them, the uncle said. He also said Yamagami’s mother is devastated by her son’s alleged crime.

Police said Yamagami, who was a Self-Defense Force member from 2002 to 2005, test-fired a weapon before the attack at multiple targets in the mountains of Nara, apparently to examine their effectiveness.

Investigators found a concrete block, a wooden panel and a metal container with bullet holes in them and what they believe were bullets scattered in the area.

Police said the suspect was seen near Abe’s speech venue in another city the day before the attack. Earlier on that day, the suspect test-fired his gun at a building related to the church.

The Asahi newspaper reported Friday that Yamagami had plotted a Molotov cocktail attack on the church’s leader, Hak Ja Han Moon, during her visit to central Japan in 2019 but could not access the venue for the large gathering. The suspect reportedly changed his target to Abe after the pandemic-related border restrictions, thinking it would be difficult for Han Moon, who is Korean, to visit Japan.

Abe’s governing party and its junior coalition partner, Komeito, won a landslide victory in the election, helped in part by sympathy votes for Abe.

A smaller funeral was held Tuesday at a temple in Tokyo. Kishida on Thursday announced plans to hold a state ceremony for Abe in the fall.

Japanese Communist Party leader Kazuo Shii on Friday opposed the plan, saying in a statement, “The state funeral will mean a full government endorsement for Mr. Abe’s political views, which are actually largely divided among the public, and praise and glorify his politics.”

The use of tax money for a state funeral for the divisive leader also received mixed reactions from other opposition leaders. 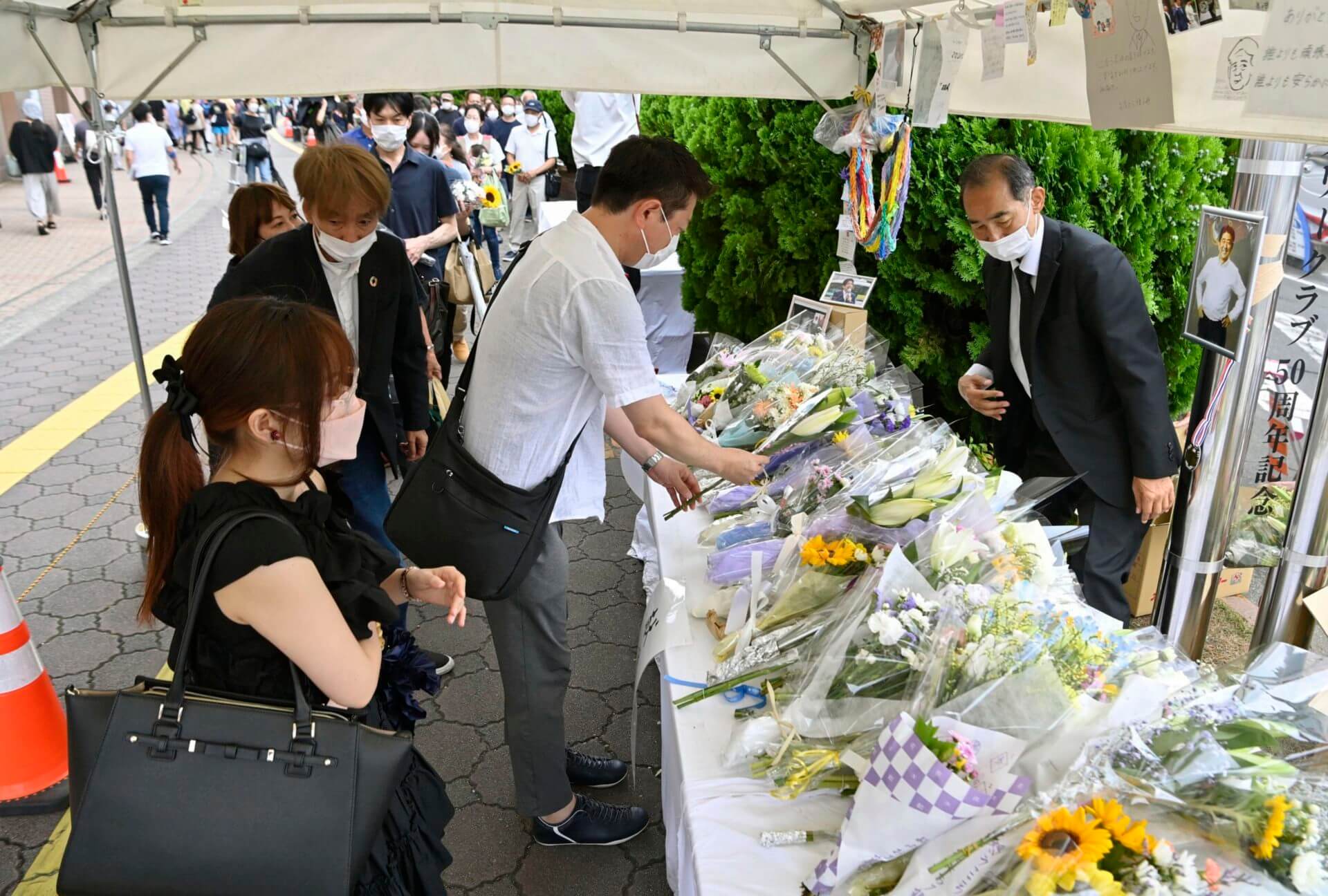 People offer flowers at a memorial area near the site where former Japanese Prime Minister Shinzo Abe was fatally shot in Nara, western Japan, Friday, July 15, 2022. Many people mourned the death of Abe at the site where he was gunned down during a campaign speech a week ago Friday, shocking a nation known for its low crime rate and strict gun control. (Kyodo News via AP)
MORE NEWS