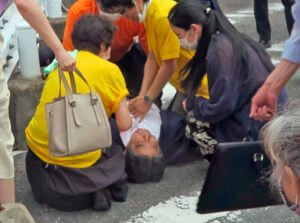 In this image from a video, Japan’s former Prime Minister Shinzo Abe, center, falls on the ground in Nara, western Japan Friday, July 8, 2022. Former Japanese Prime Minister Shinzo Abe, a divisive arch-conservative and one of his nation’s most powerful and influential figures, has died after being shot during a campaign speech Friday in western Japan, hospital officials said.(Kyodo News via AP)

Japan’s longest-serving prime minister, Abe was shot in the back while campaigning in the city of Nara for parliamentary candidates. He died at a hospital, two days before the election.

The suspect apparently circumvented the nation’s ultra-tight gun regulations by building his own weapon. Police said the 15-inch (40-centimeter) device was obviously homemade, and one expert compared it to a muzzle-loading gun. Authorities confiscated similar weapons when they raided the suspect’s nearby one-room apartment.

The motive of the man, who was taken into custody at the scene, remained unclear.

Fatal gun violence is virtually unheard of in Japan, and most Japanese go through life without ever handling, or even seeing, a real gun. Stabbings are more common in killings.

Major universities have rifle clubs, and Japanese police are armed, but gun ownership rights have been a distant issue for decades. Even police rarely resort to firing their pistols.

With a population of 125 million, the country had just 10 gun-related criminal cases last year, resulting in a single death and four injuries, according to police. Eight of those cases were gang-related. 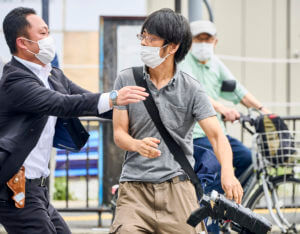 CORRECTS SECOND SENTENCE – Tetsuya Yamagami, center, holding a weapon, is detained near the site of gunshots in Nara, western Japan Friday, July 8, 2022. Yamagami is accused of assassinating former Prime Minister Shinzo Abe by opening fire on at him from behind as he delivered a campaign speech, an attack that stunned a nation that has some of the world’s toughest gun laws.(Nara Shimbun/Kyodo News via AP)

The densely populated capital of Tokyo had zero gun incidents, injuries or deaths during that same year, although 61 guns were seized there.

“Japanese people are in a state of shock,” said Shiro Kawamoto, professor at the College of Risk Management at Nihon University in Tokyo.

“This serves as a wake-up call that gun violence can happen in Japan, and security to protect Japanese politicians must be re-examined,” Kawamoto said. “To assume this kind of attack will never happen would be a big mistake.”

Abe’s security team may face serious questions. But because such attacks are extraordinary in Japan, relatively light security is the norm, even for former prime ministers.

In remarks in Washington, U.S. President Joe Biden described the “profound impact” of the shooting “on the psyche of the Japanese people.”

“This is a different culture — they’re not used to” gun violence “as unfortunately we are. Here in the United States, we know how deep the wounds of gun violence go from communities that are affected. And this assassination is a tragedy that all the people of Japan are feeling.”

Japan’s last high-profile shooting occurred in 2019, when a former gang member was shot at a karaoke venue in Tokyo. 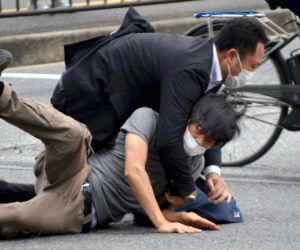 Tetsuya Yamagami, bottom, is detained near the site of gunshots in Nara Prefecture, western Japan, Friday, July 8, 2022. Former Japanese Prime Minister Shinzo Abe, a divisive arch-conservative and one of his nation’s most powerful and influential figures, has died after being shot during a campaign speech Friday in western Japan, hospital officials said. Nara prefectural police confirmed the arrest of Yamagami, 41, on suspicion of attempted murder of Japan’s former Prime Minister Shinzo Abe.(Katsuhiko Hirano/The Yomiuri Shimbun via AP)

Under Japanese law, possession of firearms is illegal without a special license. Importing them is also illegal. The same rules apply to some kinds of knives and certain other weapons, like crossbows.

People who wish to own firearms must go through a stringent background check, including clearance by a doctor, and declare information about family members. They must also pass tests to show they know how to use guns correctly. Those who pass and purchase a weapon must also buy a special locking system for it at the same time.

Passing those hurdles will allow a license holder to shoot at clay targets. Hunting requires an additional license.

The weapon used in the attack on Abe was probably a “craft-made” firearm, according to N.R. Jenzen-Jones, the director of Armament Research Services, a specialist arms investigations firm.

He compared the weapon to a musket in which the gunpowder is loaded separately from the bullet.

“Firearms legislation in Japan is very restrictive, so I think what we’re seeing here, with what’s probably a muzzle-loading weapon, is not just an attempt to circumvent the control of firearms, but also the strict control of ammunition in Japan,” he said.