LAS VEGAS (KTNV) — Las Vegas police are sharing photos of a potential suspect after a local investigative reporter was stabbed to death outside his home. 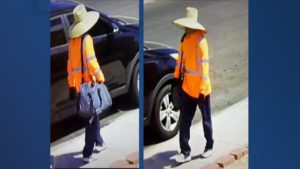 Las Vegas police shared these photos of a person suspected of the murder of local investigative journalist Jeff German. (LVMP via KTNV)

Police located the images through the course of their investigation into the murder of longtime Las Vegas journalist and investigative reporter Jeff German.

German was found dead outside his home near Vegas Drive and Tenaya Way on Saturday morning, police said previously. Information from Metro officials indicated German had been dead for several hours before his body was discovered.

“At this time, it appears the suspect was potentially casing the area to commit other crimes before the homicide occurred,” police said Monday.

Detectives asked area residents to review their home or business security cameras to see if they captured video of this suspect. Specifically, residents in the area of Vegas Drive and Rock Springs Drive should check footage captured between the hours of 8 a.m. and 1 p.m. on Friday, Sept. 2. 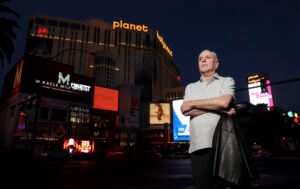 Jeff German, host of “Mobbed Up,” poses with Planet Hollywood, formerly the Aladdin, in the background on the Strip in Las Vegas, Wednesday, June 2, 2021. Authorities say German, a Las Vegas investigative reporter has been stabbed to death outside his home and police are searching for a suspect. The Las Vegas Review-Journal says officers found journalist German dead with stab wounds around 10:30 a.m. Saturday, Sept. 3, 2022, after authorities received a 911 call. (K.M. Cannon/Las Vegas Review-Journal via AP)

“We take this case very seriously and our investigators have been working non-stop to identify and apprehend the suspect,” said Capt. Dori Koren with LVMPD. “We enacted our Major Case Protocol immediately following our initial response and are using all LVMPD resources to maximize the progress of this investigation.”

The Review-Journal’s executive editor, Glenn Cook, said German had not communicated any concerns about his personal safety or any threats made against him to anyone in the newspaper’s leadership prior to his murder.

This story was originally published Sept. 5 by KTNV in Las Vegas, an E.W. Scripps Company.