MINNEAPOLIS (AP) — Prosecutors have urged a Minnesota judge not to dismiss the charges against one of four former Minneapolis police officers charged in the death of George Floyd, saying Tou Thao pushed back a crowd of concerned bystanders and prevented them from intervening as the other officers pinned Floyd to the ground.

In a filing late Monday, the attorney generals office said there is “more than sufficient” evidence to support charges of aiding and abetting second-degree murder and second-degree manslaughter against Thao. His attorney had filed a motion to dismiss. 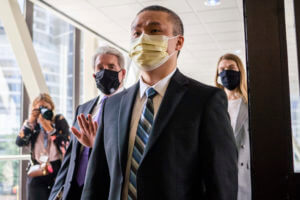 Hennepin County District Judge Peter Cahill has scheduled a hearing for Sept. 11 to hear motions. The four were fired after Floyd’s May 25 death, which sparked protests against racial injustice and police brutality worldwide. An autopsy found Floyd, a Black man, died of asphyxiation.

Derek Chauvin, who kept his knee pressed to Floyd’s neck for nearly eight minutes, is charged with second-degree murder, third-degree murder and second-degree manslaughter. J. Kueng and Thomas Lane face the same charges as Thao. Prosecutors want to try the four together. Trial would begin March 8.

“In the first five minutes Floyd was on the ground, he told the officers at least 20 times that he could not breathe. He told them nearly 10 times that he was dying. And then he fell silent,” prosecutors wrote. “As Floyd lost consciousness, a crowd of bystanders pleaded with Thao. They told him that the officers were killing Floyd. They screamed that Floyd had stopped moving. They alerted Thao that Floyd had stopped breathing. And they begged Thao almost 30 times to take Floyd’s pulse.

“But instead of intervening on Floyd’s behalf, Thao continued to push the crowd of bystanders back to the sidewalk, allowing the other officers to continue to pin Floyd to the ground — with Chauvin on Floyd’s neck, Kueng on Floyd’s back, and Lane on Floyd’s legs.” the filing continued.

Thao has minimized his role in Floyd’s death, describing himself in an interview with investigators as a “human traffic cone” as he held back the onlookers. His motion to dismiss cited a lack of probable cause to support the idea that Thao knew the other officers were going to commit a crime or that he intended to further the commission of a crime.