BRUNSWICK, Ga. (AP) — None of the three white men charged in the killing of Ahmaud Arbery had cause to make a citizen’s arrest when they saw him in their neighborhood, according to a prosecutor, who said Monday in closing arguments that the defendants decided to pursue him “because he was a Black man running down their street.”

Closing arguments before a disproportionately white jury began after 10 days of testimony that concluded last week, not long after the man who shot Arbery testified he pulled the trigger in self-defense.

Arbery’s killing became part of a larger, national reckoning on racial injustice after a graphic video of his death leaked online two months later. Though prosecutors didn’t argue that racism motivated the killing, federal authorities have charged all three men with hate crimes, alleging that they chased and killed Arbery because he was Black.

Father and son Greg and Travis McMichael grabbed guns and pursued Arbery, 25, in a pickup truck after spotting him running in their neighborhood on Feb. 23, 2020. A neighbor, William “Roddie” Bryan, joined the chase and recorded the video of Travis McMichael opening fire as Arbery threw punches and grabbed for his shotgun.

No one was charged in the killing until Bryan’s video leaked and the Georgia Bureau of Investigation took over the case from local police. All three men face counts of murder and other charges.

Prosector Linda Dunikoski told the jury the defendants had no evidence Arbery had committed crimes in their neighborhood, but instead acted on assumptions based on neighborhood gossip and speculative social media posts.

“They made the decision to attack Ahmaud Arbery in their driveways because he was a Black man running down their street,” Dunikoski said. She added: “They shot and killed him. Not because he was a threat to them. But because he wouldn’t stop and talk to them.”

Defense attorneys say the men suspected Arbery had burglarized a house under construction and intended to hold him until police arrived. Security cameras recorded him inside the home five times between October 2019 and the day Arbery was killed. None of the videos showed him stealing or damaging anything.

Dunikoski said the McMichaels and Bryan chased Arbery for five minutes, using their trucks to cut him off, run him off the road and otherwise prevent him from fleeing. And she repeated Greg Michael’s words to local police after the shooting that Arbery was “trapped like a rat.” 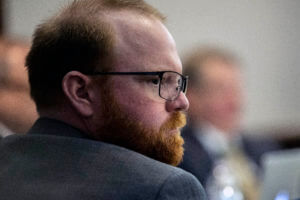 Travis McMichael sits with his attorneys before the start of closing arguments to the jury during the trial of he, and his father Greg McMichael, and William “Roddie” Bryan, at the Glynn County Courthouse, Monday, Nov. 22, 2021, in Brunswick, Ga. The three men charged with the February 2020 slaying of 25-year-old Ahmaud Arbery. (AP Photo/Stephen B. Morton, Pool)

Bryan recorded Travis McMichael standing with a shotgun outside the driver’s side door of his idling truck when Arbery approched on foot, then ran around the passenger side. They met in front of the truck, which blocked the camera’s view, when Travis McMichael fired the first of three shotgun blasts. The video shows Arbery punching him and grabbing for the gun as two more shots are fired, then Arbery turns to try to run again before falling facedown in the street.

Dunikoski noted Arbery never threatened the McMichaels during the chase, and he carried no weapons.

“You can’t bring a gun to a fistfight. It’s unfair, right?” the prosecutor said.

She said it was Travis McMichael who attacked Arbery — first with his truck, then by pointing a shotgun at him as Arbery ran toward him.

“They can’t claim self-defense under the law because they were the initial, unjustified aggressors,” Dunikoski said, “and they started this.”

Arbery had enrolled at a technical college and was preparing to study to become an electrician like his uncles when he was killed. The McMichaels told police they suspected Arbery was a burglar because security cameras had recorded him several times in the unfinished house on their street.