DETROIT (AP) — A prosecutor announced murder charges Wednesday against a 34-year-old man in the slayings of four women in Detroit whose deaths authorities have characterized as the work of a serial killer. 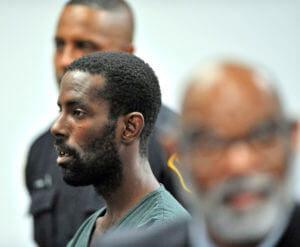 FILE – In this June 20, 2019 file photo, Deangelo Martin stands for a probable cause hearing, in Detroit.  (Todd McInturf/Detroit News via AP, File)

Deangelo Martin is charged with four counts of first-degree murder and four counts of felony murder in the killings of the women whose bodies were found in abandoned houses in the city as far back as February 2018, Wayne County Prosecutor Kym Worthy said at a news conference.

Martin was arraigned Wednesday afternoon. A probable cause conference was scheduled for Oct. 2 and a preliminary examination on Oct. 9.

Police Chief James Craig has said he sees similarities between three of the slayings and the assaults of at least two other women who survived attacks.

“I think it’s pretty clear that we believe he is a serial killer,” Worthy said.

All the victims were found face down with a used condom beside them, she said. A coroner determined that Nelson and Harrison died of blunt force trauma but the cause of death for the other two couldn’t be determined because their bodies were too badly decomposed, Worthy said. 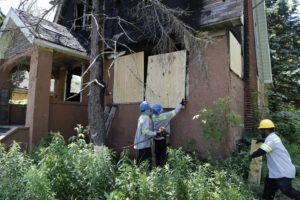 FILE – In this June 11, 2019 file photo, members of the Detroit’s Board Up Brigade board up a vacant home in north Detroit. Murder charges could be announced against man suspected of killing at least four women and stowing their bodies in vacant houses in Detroit. Wayne County Prosecutor Kym Worthy is expected Wednesday, Sept. 18, to discuss the case against 34-year-old Deangelo Martin.(AP Photo/Carlos Osorio, File)

Police are investigating two additional possible homicide cases that might also be connected, she said.

The Associated Press left a message Wednesday seeking comment from Martin’s appointed defense attorney in the assault and kidnapping cases.

Police have said they believe all the women were sex workers.

She continued: “We worked tirelessly to make sure that we can bring them some modicum of justice, of respect and of dignity, no matter what they were engaged in before, during, after they were reported missing.”

Martin was initially arrested in June in the rape and attempted murder of a woman who was able to escape the attack. At that point, police had already uncovered three homicide victims, and teams of police officers and other city workers were searching hundreds of vacant buildings for more bodies. 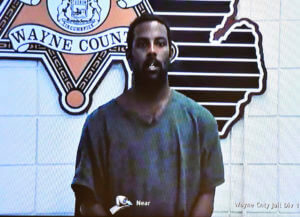 Deangelo Martin is displayed on a monitor during his video arraignment at 36th District Court, Wednesday, Sept. 18, 2019, in Detroit.
(Clarence Tabb, Jr./Detroit News via AP)

“This is the kind of case that creates so much fear in our community,” Craig said during the news conference. “We’re very diligent, relentless in how we approach these matters.”

Six years ago, Detroit had at least 30,000 empty houses and 20 square miles (50 square kilometers) of vacant land. Mayor Mike Duggan has said removing blighted houses is a priority in his efforts to revive Detroit since the city’s 2014 exit from the largest municipal bankruptcy in U.S. history.

Duggan this week announced plans to ask voters to approve the sale of up to $250 million in bonds to eradicate residential blight across the city. A proposed resolution to put the initiative on the March 2020 ballot has been submitted to the City Council.