BRUNSWICK, Ga. (AP) — The man who fatally shot Ahmaud Arbery had previously used racial slurs in a text message and on social media, a prosecutor said Thursday as a judge weighed whether to grant bond for the defendant and his father.

Travis McMichael and his father, Gregory McMichael, have been jailed since their arrests in May, more than two months after Arbery was slain. The McMichaels, who are white, chased and fatally shot the 25-year-old Black man after they spotted him running in their neighborhood just outside the port city of Brunswick. 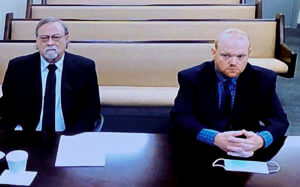 In this image made from video, from left, father and son, Gregory and Travis McMichael, accused in the shooting death of Ahmaud Arbery in Georgia on Feb. 2020, listen via closed circuit tv in the Glynn County Detention center in Brunswick, Ga., on Thursday, Nov. 12, as lawyers argue for bond to be set at the Glynn County courthouse. The McMichaels chased and fatally shot Ahmaud Arbery, a 25-year-old Black man, after they spotted him running in their neighborhood just outside the port city of Brunswick.(AP Photo/Lewis Levine)

Questions about whether racism played a role in the killing sharpened during a previous hearing when an investigator testified that a third defendant, who took cellphone video of the shooting, told authorities he heard Travis McMichael, 34, utter a racial slur after he blasted Arbery three times with a shotgun.

In the courtroom Thursday, Zachary Langford — a friend of Travis McMichael’s since boyhood — testified his friend was a jokester who got along with everyone and had at least one Black friend.

Then prosecutor Jesse Evans asked Langford about a text message Travis McMichael had sent him last year that used a slur for Black people when referring to a “crackhead … with gold teeth.”

Langford at first said he didn’t recall receiving the message. Then after reviewing a transcript of the exchange, he answered: “He was referring to a raccoon, I believe.”

Evans also cited a photo Langford posted to Facebook last year to which Travis McMichael replied: “Sayonara,” along with an offensive term for Asians followed by an expletive. Langford said he didn’t recall that, either.

Defense attorneys for both McMichaels have denied any racist motives in the shooting. Right after the Feb. 23 shooting, Gregory McMichael told police that he and his son armed themselves and got in a pickup truck to pursue Arbery because they suspected he was a burglar.

“These men are proud of what they have done,” Arbery’s mother, Wanda Cooper-Jones, told the judge as she asked him to deny them bond. “They want to go home because they think in their selfish minds that they are the good guys.”

Prosecutors say Arbery was merely jogging when the McMichaels pursued him. Their defense attorneys insisted in court Thursday that’s not true.

“We have substantial evidence that, on the day in question, Mr. Arbery was not a jogger,” said Robert Rubin, one of Travis McMichael’s attorneys. “He was there for nefarious purposes.”

Rubin gave no evidence in court that Arbery was doing anything wrong the day he was shot.

“He told me he wished it never happened like that,” she said. “He prayed for Ahmaud’s mother and his family daily.”

Superior Court Judge Timothy Walmsley adjourned court Thursday evening without a bond decision because there was still more evidence to be presented. He planned to continue the hearing Friday.

The McMichaels weren’t arrested until the cellphone video of the shooting leaked online and the Georgia Bureau of Investigation took over the case. In June, a grand jury indicted both McMichaels and a neighbor, William “Roddie” Bryan, on charges. 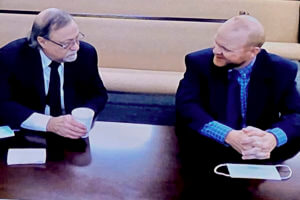 In this image made from video, from left, father and son, Gregory and Travis McMichael, accused in the shooting death of Ahmaud Arbery in Georgia on Feb. 2020, speak to each other via closed circuit tv in the Glynn County Detention center in Brunswick, Ga., on Thursday, Nov. 12, 2020. The McMichaels chased and fatally shot Ahmaud Arbery, a 25-year-old Black man, after they spotted him running in their neighborhood just outside the port city of Brunswick. (AP Photo/Lewis Levine)

Travis McMichael’s mother, Lee McMichael, testified that he lived with her and his father, has a 4-year-old son and doesn’t have a passport. His attorneys cited his past service as a U.S. Coast Guard mechanic as proof of his character.

“In no way, shape or form is Travis hateful towards any group of people, nor does he look down on anyone based on race, religion or beliefs,” Curt Hall, a former Coast Guard roommate of Travis McMichael who described himself as “multiracial,” wrote in a letter supporting bond for his friend.

The McMichaels’ attorneys are also asking the judge to reject the indictment’s malice murder charge, saying it was written in a way that improperly “charges two crimes in one count.” They made a similar argument for tossing out a charge of criminal attempt to commit false imprisonment.