COLUMBUS, Ohio (AP) — Surveillance video showing an Ohio judge being shot and wounded at a courthouse before the assailant was himself shot and killed has been released by a county prosecutor.

The video was made public by Jefferson County Prosecutor Jane Hanlin following a three-year open records fight for the footage brought by The Associated Press. The Ohio Supreme Court ruled last month the video is a public record that should be released. 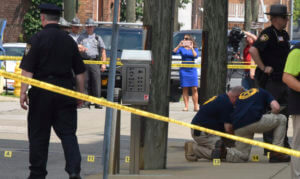 FILE – In this Monday Aug. 21, 2017 file photo shows evidence markers being placed on N. Court Street and the sidewalk next to the Jefferson County Courthouse in Steubenville, Ohio, after Jefferson County Judge Joseph Bruzzese Jr. was ambushed and shot earlier in the day. (Darrell Sapp/Pittsburgh Post-Gazette via AP)

The court rejected the prosecutor’s arguments that releasing the video could endanger court personnel by revealing details of security protocol.

The video shows Jefferson County Judge Joseph Bruzzese Jr. being shot outside a courthouse in Steubenville in eastern Ohio in August 2017 by Nathaniel Richmond and then Richmond being killed by a probation officer.

In the video, which does not have sound, Bruzzese walks toward the courthouse when Richmond approaches from a parking lot and appears to begin firing. Bruzzese raises his hands in self-defense, stumbles but doesn’t fall, then struggles with Richmond who appears to drop his gun.

Bruzzese then falls into the street, wields his own gun, appears to begin firing and to hit Richmond, who limps away.

Richmond runs to his car and the judge stands, still in a shooting stance. Meanwhile, the officer runs from around the corner of a parking lot as Richmond pulls backward in a car. The officer shoots Richmond and the car stops across the parking lot. Remarkably, the judge — who was shot in the abdomen — stays standing and even walks across the street.

About 10 seconds later, two armed deputies emerge from the courthouse. More officers arrive, and then just under seven minutes later, an ambulance pulls up.

Richmond, 51, had a pending wrongful death lawsuit in front of Bruzzese at the time. The judge recovered and later returned to the bench.

The day of the shooting, the AP asked for a copy of the surveillance video recorded by a camera positioned in front of the courthouse. Hanlin denied that request, saying the video was a confidential law enforcement record and part of the courthouse’s infrastructure security system, among other arguments.

The state Supreme Court agreed to hear the case after the Ohio Court of Claims sided with the AP and appeals court later ruled against the AP.

The Jefferson County prosecutor never provided any evidence about how the county was using the video footage of the shooting for security purposes, said Justice Michael Donnelly, who wrote the court’s unanimous opinion.

“That this incident and response were readily observable to the public would seemingly undermine the concern that the video might disclose something that an eyewitness would not have seen,” Donnelly wrote.

Hanlin has said her office respected the decision but was disappointed by it.

The decision was the first time the high court ruled on a public records challenge brought under a 2016 law allowing non-lawyers to make requests through the Ohio Court of Claims.

Media advocacy groups and media companies supporting the AP in a court filing include the Ohio Coalition for Open Government, Ohio Association of Broadcasters, the Society of Professional Journalists, E.W. Scripps Co. and Gannett Co.