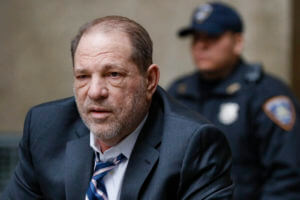 NEW YORK (AP) — Prosecutors at Harvey Weinstein’s rape trial are on schedule to rest their case Thursday after more than two weeks of testimony, including graphic accounts from six among scores of women who’ve accused him of vile behavior.

The last of the accusers to testify, model Lauren Marie Young, is slated to return to the witness stand after telling jurors Wednesday that Weinstein stripped off his clothes, pulled down her dress and groped her breast in a hotel bathroom in 2013.

She’ll face more questioning from Weinstein lawyer Damon Cheronis, who so far has focused his cross-examination on inconsistencies between Young’s courtroom testimony and her previous statements to investigators.

Young’s testimony Wednesday that Weinstein grazed her vagina during the alleged assault touched off a tense exchange with Cheronis, who reminded jurors that she told police in 2018, “I don’t think he touched me down there.”

“Is that something you just added today?” Cheronis asked.

“No, but you’re a witness and you’re supposed to tell the truth.”

The criminal charges at issue at Weinstein’s New York City trial are based on two allegations: that he raped a woman in March 2013 and that he forced oral sex on another woman, a TV and film production assistant, in 2006.

Both of them testified earlier in the trial, with the rape accuser spending an often emotional three days on the witness stand.

Additional women, including Young, have been allowed to testify as prosecutors attempt to show there was a practiced method to Weinstein’s attacks, including inviting women to his hotel room to discuss business, then disrobing and demanding sexual favors.

Another such witness, model Tarale Wulff, is being brought back to the witness stand Thursday because of an issue with evidence that emerged after she testified last week.

Once the prosecution rests, Weinstein’s lawyers will be calling witnesses of their own as they look to raise doubts about the accusers and underscore their position that any encounters involving Weinstein and the women were consensual. Among their witnesses is a cognitive psychologist known for her testimony on human memory.

Young, 30, alleges Weinstein assaulted her after he invited her up to his Beverly Hills hotel room and lured her into the bathroom while a friend of his who helped arrange the meeting closed the door behind them.

A friend she says she told about the encounter is also expected to testify Thursday as a corroborating witness.

Young’s allegations are partly the basis of criminal charges filed by the Los Angeles County District Attorney on Jan. 6, just as Weinstein’s New York trial was getting underway. Weinstein is also charged in that case with raping a different woman the night before the alleged assault on Young.