According to an arrest report, the boy’s mother told police Mason became ill on Dec. 11. She said she wanted to help her son, but Toseland told her she couldn’t. He took the boy into a bedroom and barricaded the door, preventing her from entering.

She grew concerned as, “for a considerable amount of time,” Toseland refused to let her see Mason, the report states. After that day, police were told she never saw her son again.

When she demanded Toseland tell her where her son was, “he told her that Mason was deceased,” the report states.

Toseland allegedly told her it was “an accident” and that he found Mason covered in vomit and not breathing. He reportedly tried to give the boy CPR but could not save him. 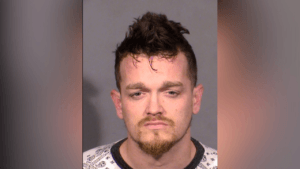 Brandon Toseland faces two charges of first-degree kidnapping and one of open murder after a boy’s body was found in a freezer on Feb. 22, 2022. (Las Vegas Metropolitan Police Department)

Mason’s mother also told officers Toseland wouldn’t let her see the body because it would “take his freedom away.”

The woman described being held captive by her boyfriend of 11 months — at times being bound and tied so she could not move, the report states. She said Toseland took away her cell phone and would handcuff her inside the car whenever the two left the house.

According to police, a handcuff was in plain view when they pulled Toseland over on Tuesday, after notes the woman’s daughter carried to school alerted authorities to the situation.

The child’s teacher called police after receiving the notes, which stated the mother was being held against her will and feared her son was dead.

Police were sent to the house, where they found and detained Toseland and the woman. They would soon search the home and find the child’s body inside a freezer in the garage — where Mason’s mother told officers Toseland prevented her from going.

According to the report, the child’s body was found inside a garbage bag, underneath a false cardboard bottom and multiple food items. Around the freezer, police found multiple odor absorption bags, fans and an air filtration unit. Police said it appeared the boy had been dead since early December. 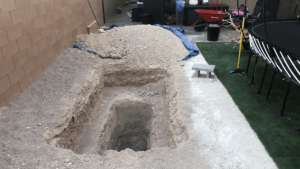 KTNV was able to a view a large, rectangular hole in the backyard of a home in east Las Vegas where a child’s body was found on Tuesday, Feb. 22, 2022. (Sean DeLancey, KTNV)

A large, rectangular hole was also discovered in the backyard of the home. Detectives have not publicly commented on it or its relevance to their investigation, but a neighbor tells KTNV it had appeared over the past month.

The woman’s daughter is now in the care of family members, police said.

Anyone with information that could aid the investigation is asked to call Crime Stoppers at 702-385-5555 to make an anonymous and confidential report.

This story was originally published Feb. 23 by KTNV in Las Vegas, an E.W. Scripps Company.