OKLAHOMA CITY (AP) — More than 60 Oklahoma lawmakers, including many Republicans who support the death penalty, urged the state attorney general to join their request for a new evidentiary hearing in the case of death row inmate Richard Glossip.

The group of 61 state legislators sent a letter last week to Attorney General John O’Connor following an independent investigation by a Texas law firm that raised questions about Glossip’s guilt. 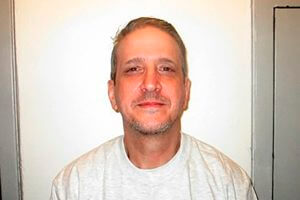 FILE – In this Feb. 19, 2021, photo provided by Oklahoma Department of Corrections shows Richard Glossip. More than 60 Oklahoma lawmakers are urging the state attorney general to join their request for a new evidentiary hearing in the case of death row inmate Richard Glossip. The group of 61 state legislators includes many Republicans who support the death penalty but question whether Glossip is guilty. (Oklahoma Department of Corrections via AP, file)

“The report concluded that no reasonable juror who heard all the evidence would find Mr. Glossip guilty,” the letter stated. “As elected officials representing the citizens of this great state, we believe it is vitally important to conduct a serious review of this case so that the truth might be conclusively found.”

The report by the Houston law firm Reed Smith did not find any definitive proof of Glossip’s innocence, but raised concerns about lost or destroyed evidence and a detective in the case asking leading questions to Glossip’s co-defendant, Justin Sneed, to implicate Glossip in the 1997 killing of Glossip’s boss, motel owner Barry Van Treese. Sneed, who admitted killing Van Treese but said he did so at Glossip’s direction, was sentenced to life in prison and was a key witness against Glossip.

O’Connor’s office didn’t immediately respond to a request for comment, but prosecutors in his office have urged the Oklahoma Court of Criminal Appeals to reject Glossip’s request for an evidentiary hearing, suggesting it’s a delay tactic.

“The appellant’s actions in this sense are dilatory and only prolong the wait for justice for the victim, Barry Van Treese, and his family in this case,” the state wrote in response to Glossip’s objection to setting an execution date.

Glossip, now 59, has maintained his innocence and has been scheduled to be executed three separate times, only to be spared shortly before his death sentence was carried out. He was just hours from being executed in September 2015 when prison officials realized they had received the wrong lethal drug, a mix-up that led in part to a nearly seven-year moratorium on the death penalty in Oklahoma.