RICHMOND, Va. (WTVR) — Donna Russell is speaking out so someone will come forward and help find the person who killed her brother Henry “Eddie” Northington. WTVR Crime Insider Jon Burkett has partnered with the Reopen the Case Foundation to highlight cold cases in Virginia with the hope that someone will see the story and provide police with the information investigators need to make an arrest.

It was sitting on the pedestrian bridge over the railroad tracks along James River Park’s Northbank near Texas Beach. His body was found later that afternoon in the James River less than a mile away.

Northington, 39, was homeless at the time of his death.

The Navy veteran was described as a wanderer who was estranged from part of his family because he was gay.

“All of this would be so much different now. People look at people differently now. He was gay, they wouldn’t have thought that was bad,” Northington’s sister Donna Russell said. “If it happened today, it would have been handled a whole lot differently because the public wouldn’t have stood for it either.”

“So the speculation, at least as far as I’m concerned, was he was living at the barrels, this campground called the tunnels of the barrels. It’s a big drainage tunnel,” Mark Holmberg, a former WTVR and Richmond Times-Dispatch reporter who covered the case, said. “The body was found about half mile down river. It had his massive crush wound on the side of his chest and abdomen like somebody picked up a boulder and just smashed it down on him.”

Holmberg said both he and the police had a suspect in mind at the time of the murder.

“Another homeless guy,” he said. “My last information was right after the crime, he went to Seattle or the Seattle area.”

Dr. Dan Moore, who was not affiliated with the case, said from what he has seen, that there must have been other witnesses to Eddie Northington’s death. 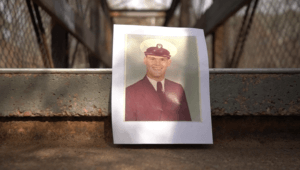 “[He] was six foot four. He was a big guy. Just physically moving somebody that larger around, to get them in position, all these other things, you’d think you would need at least more than one person helping if not a group of people,” Moore said. “Even with training, it just takes a lot of effort [to behead someone] and a lot of just physical labor unless they’re using something like a power tool or a hacksaw. Maybe you could get through it a lot faster. But you’d still think at least maybe five to 10 minutes. And making a fair amount of noise.”

More than 20 years later, the brutality of the crime is something Russell still cannot understand.

“I could have never imagined in my lifetime that something would have happened like this to anyone. And it’s still hard to believe after all these years that it happened Eddie,” she said. “I just hope somebody helps. Somebody knows something. People saw something. I know they’re scared. I was scared. That’s why I didn’t say stuff before because I have family to protect. But at this point, as things go on and years go on and people pass, I don’t want to die not knowing or not trying to help find out what happened to my brother.”

If you have any information please call the Reopen the Case Foundation at 833-RTC-FNVA.

This story was originally published June 20 by WTVR in Richmond, an E.W. Scripps Company.