ST. LOUIS (AP) — The 19-year-old gunman who killed a teacher and a 15-year-old girl at a St. Louis high school was armed with an AR-15-style rifle and what appeared to be more than 600 rounds of ammunition, Police Commissioner Michael Sack said Tuesday. 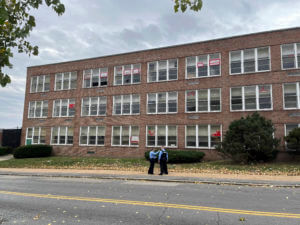 The outside of Central Visual and Performing Arts High School in St. Louis, on Monday, Oct. 24, 2022. A fatal shooting just after 9 a.m. at the high school forced students to barricade doors and huddle in classroom corners, jump from windows and run out of the building to seek safety. (AP Photo/Michael Phillis)

Police killed Harris in an exchange of gunfire.

Sack read Harris’ note in which the young man lamented that he had no friends, no family, no girlfriend and a life of isolation. In the note, he called it the “perfect storm for a mass shooter.”

Sack said Harris had some ammo strapped to his chest, some in a bag, and other magazines were found dumped in stairwells.

The attack forced students to barricade doors and huddle in classroom corners, jump from windows and run out of the building to seek safety. One terrorized girl said she was eye-to-eye with the shooter before his gun apparently jammed and she was able to run out. Several people inside the school said they heard Harris warn, “You are all going to die!”

Harris, 19, graduated from the school last year. The FBI was assisting police in the investigation. Sack, speaking at a news conference, urged people to come forward when someone who appears to suffer from mental illness or distress begins “speaking about purchasing firearms or causing harm to others.” 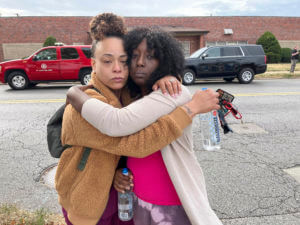 Janay Douglas, left, and Renada Bridgett, right, are pictured outside of Central Visual and Performing Arts High School in St. Louis, on Monday, Oct. 24, 2022. Douglas is the parent of a 15-year-old at the school who was stuck in a hallway when the school shutdown during a shooting. Bridgett is the student’s aunt. (AP Photo/Michael Phillis)

Relatives of those killed mourned their losses.

“Alexandria was my everything,” her father, Andre Bell, told KSDK-TV. “She was joyful, wonderful and just a great person.”

Alexandria, a 10th grader, was outgoing, loved to dance and was a member of the school’s junior varsity dance team.

“She was the girl I loved to see and loved to hear from. No matter how I felt, I could always talk to her and it was alright. That was my baby,” Andre Bell said.

Abby Kuczka said her mother was killed when the gunman burst into her classroom and she moved between him and her students.

“My mom loved kids,” Abbey Kuczka told the St. Louis Post-Dispatch. “She loved her students. I know her students looked at her like she was their mom.”

The seven injured students are all 15 or 16 years old. All were listed in stable condition. Sack said four suffered gunshot or graze wounds, two had bruises and one had a broken ankle — apparently from jumping out of the three-story building. 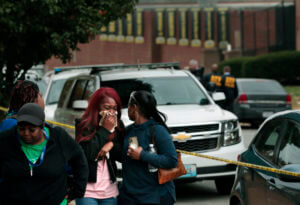 A friend of the student killed in a school shooting at Central Visual & Performing Arts High School is helped leaving the school grounds, Monday, Oct. 24, 2022, in the Southwest Garden neighborhood of St. Louis. A teacher, student and the suspected shooter were killed in the morning attack. (Robert Cohen/St. Louis Post-Dispatch via AP)

The school in south St. Louis was locked, with seven security guards near each door, St. Louis Schools Superintendent Kelvin Adams said. A security guard initially became alarmed when he saw the gunman trying to get in one of the doors. He was armed with a gun and “there was no mystery about what was going to happen. He had it out and entered in an aggressive, violent manner,” Sack said.

That guard alerted school officials and made sure police were contacted.

Harris managed to get inside anyway — Sack declined to say how, saying he didn’t want to “make it easy” for anyone else who wants to break into a school.

Harris was armed with nearly a dozen 30-round high-capacity magazines, Sack said.

“This could have been much worse,” Sack said.

Central Visual and Performing Arts shares a building with another magnet school, Collegiate School of Medicine and Bioscience. Central has 383 students, Collegiate 336.

Monday’s school shooting was the 40th this year resulting in injuries or death, according to a tally by Education Week — the most in any year since it began tracking shootings in 2018. The deadly attacks include the killings at Robb Elementary School in Uvalde, Texas, in May, when 19 children and two teachers died. Monday’s St. Louis shooting came on the same day a Michigan teenager pleaded guilty to terrorism and first-degree murder in a school shooting that killed four students in December 2021.

Taniya Gholston said she was saved when the shooter’s gun jammed as he entered her classroom. “All I heard was two shots and he came in there with a gun,” the 16-year-old told the Post-Dispatch. “I was trying to run and I couldn’t run. Me and him made eye contact but I made it out because his gun got jammed.”

The gunman pointed his weapon at Raymond Parks, a dance teacher at the school, but did not shoot him, Parks said. The kids in his class escaped outside and Parks tried to stop traffic and get someone to call the police. They came quickly.

“You couldn’t have asked for better,” Parks said of the police response.

Ashley Rench said she was teaching advanced algebra to sophomores when she heard a loud bang. Then the school intercom announced, “Miles Davis is in the building.”

The gunman tried the door of the classroom but did not force his way in, she said. When the police started banging, she wasn’t sure at first if it really was law enforcement until she was able to glance out and see officers.

Kuczka, the slain teacher, taught health at Central for 14 years and recently began coaching cross-country at Collegiate, her daughter said. “She was definitely looking forward to retirement though. She was close,” Abbey Kuczka said.

Kuczka’s biography on the school website said she was the married mother of five and a grandmother of seven. She was an avid bike rider and was part of a 1979 national championship field hockey team at what is now Missouri State University.

“I cannot imagine myself in any other career but teaching,” Kuczka wrote on the website. “In high school, I taught swimming lessons at the YMCA. From that point on, I knew I wanted to be a teacher.” 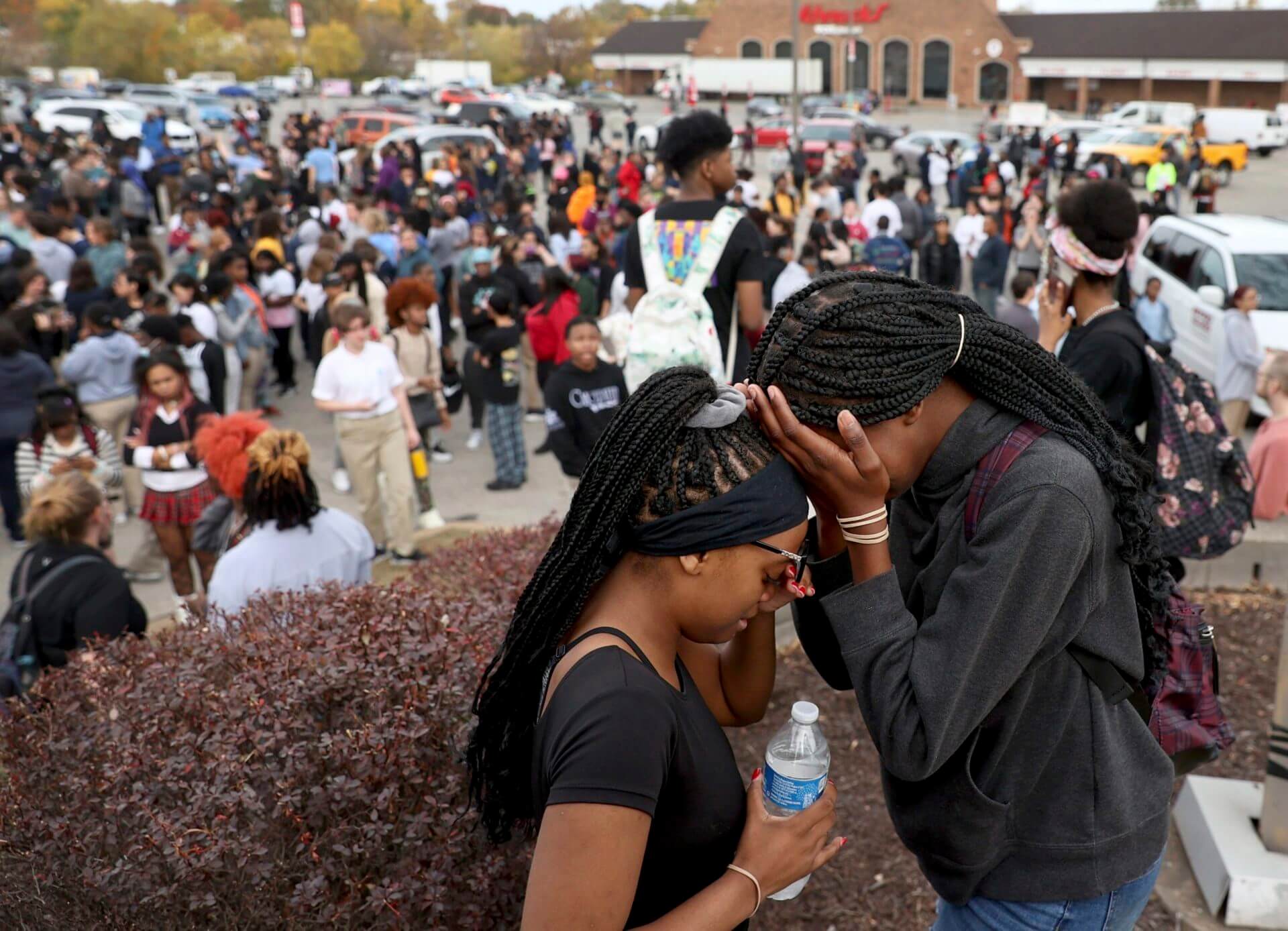 Students stand in a parking lot near the Central Visual & Performing Arts High School after a reported shooting at the school in St. Louis on Monday, Oct. 24, 2022. (David Carson/St. Louis Post-Dispatch via AP)
MORE NEWS