INDIAN RIVER COUNTY, Fla. (WPTV) — Indian River County deputies on Thursday were forced to open fire and shoot a man connected to a suspicious death at a Central Florida mosque earlier in the day, authorities said.

Sheriff Eric Flowers said that around 12:30 p.m. Thursday, license plate readers in Indian River County got a hit on a Chrysler Town & Country minivan that was tied to a crime in Seminole County.

In that case, authorities said, a 59-year-old maintenance worker at the Husseini Islamic Center had been beaten to death with a shovel around 9 a.m.

Indian River County deputies located the minivan and conducted a traffic stop in the parking lot of the Sam’s Club store.

“The suspect in this case got out of the vehicle. He was speaking a foreign language. Our folks were giving him commands,” Flowers said. “They were telling him, ‘Let us see you. Let us see your hands.'” 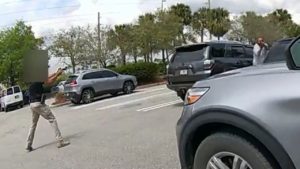 The driver of the minivan then reached into his pocket and pointed his fingers at deputies as if he had a gun.

“He was still acting crazy and he dove back into the vehicle at that point, and that’s when our folks opened fire,” Flowers said. “Two of our deputies fired on scene here.”

The sheriff said the man was struck three times. He was taken to Lawnwood Regional Medical Center. The Indian River County deputies were not hurt.

Flowers said the man has ties to the Islamic community.

A black backpack was found on the front seat of the minivan, which Flowers said belonged to the victim of the Seminole County mosque killing.

“The way that this guy is acting, he wanted to be shot,” Flowers said. “The way he pulls his fingers out, points them at the deputies, when he dove back into the vehicle, they had no choice. He’s just acting crazy out here, and I understand exactly why they did it.” 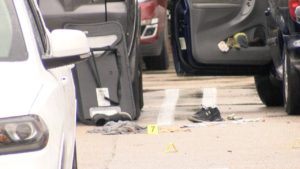 Evidence at the scene of a deputy-involved shooting at 58th Avenue and State Road 60 near Vero Beach on March 24, 2022. (WPTV)

The FBI and Seminole County Sheriff’s Office were at the Sam’s Club parking lot scene.

In a preliminary investigation, the Seminole County Sheriff’s Office said the suspect and victim were co-workers. Upon further investigation, this was proven to be unfounded. Detectives said Raslan had been making irrational statements online, including believing the mosque was his residence.

Investigators in Central Florida said they believe a fight had broken out at the mosque earlier Thursday, and the man had beaten the victim to death with a shovel.

“The scene up there, there was some concerns about potential, either staging or potential explosives,” Flowers said. “That gave us great concern. We still are acting cautiously and we haven’t completely cleared that vehicle yet.”

Flowers said the deputies who opened fire are now on paid administrative leave, which is standard department protocol when law enforcement officers discharge their weapons.

This story was originally published March 24, by WPTV in West Palm Beach, an E.W. Scripps Company.