OAKLAND, Calif. (AP) — The sister of a slain federal security officer is suing Facebook, alleging the tech giant played a part in the radicalization of two men who are accused of planning the killing on its platform.

David Patrick Underwood was fatally shot and his partner was wounded while guarding a federal building in Oakland on May 29, 2020, when a large demonstration over the police killing of George Floyd was underway nearby. Federal prosecutors said two men now awaiting trial in the drive-by shooting met through a Facebook group page dedicated to the extremist anti-government “boogaloo” movement, and used the protest as cover for the crime. 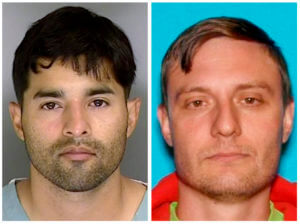 FILE – This combo of file images shows Steven Carrillo, left, provided by the Santa Cruz County Sheriff’s Office, and Robert Alvin Justus Jr., in undated Department of Motor Vehicles photo provided by the FBI. Carillo has been charged in the fatal shooting of Federal Protective Services security officer David Patrick Underwood and the wounding of his partner, while Justus Jr., has been charged with aiding and abetting the murder and attempted murder, in the shooting in Oakland, Calif., on May 29, 2020. Underwood’s sister is suing Facebook, accusing the tech giant of connecting the two anti-government extremists who plotted the killing on its platform and promoting . (Santa Cruz County Sheriff’s Office, left, and FBI via AP)

The wrongful death lawsuit against Facebook’s parent company Meta was filed Thursday in Alameda County Superior Court. It seeks at least $25,000 in damages.

“Facebook bears responsibility for the murder of my brother. As the lawsuit alleges, Facebook knowingly promoted inflammatory and violent content and connected extremists who plotted and carried out the killing of my brother,” Angela Underwood Jacobs said in a statement.

The lawsuit alleges that Facebook employed its proprietary algorithms to steer users to extremist groups as a way to keep them active on the platform, which in turn drives advertising sales and revenue.

“We believe and intend to show that Facebook’s conduct has led to a rise in extremism throughout the world and acts of real-world violence, including the murder of Officer Underwood,” the sister’s attorney, Ted Leopold, said. “It is time that Facebook is finally held accountable for its actions.”

Federal prosecutors have said Steven Carrillo, an Air Force sergeant, met his accomplice Robert Alvin Justus Jr., through a Facebook boogaloo group where they agreed to take advantage of the racial justice protests to attack law enforcement officers. Messages obtained by investigators show the men agreed to meet in person and drive to the Oakland protest, where prosecutors said Carrillo fired at Underwood and his partner with a homemade assault rifle before fleeing.

Carrillo was arrested eight days later after he shot and killed a Santa Cruz Sheriff’s sergeant and wounded four other officers who tracked down his vehicle in the community of Ben Lomond. Carrillo has pleaded not guilty to both killings. Court documents reveal Carrillo also had ties to a rightwing militia known as the Grizzly Scouts that held firearms trainings, scouted protests, and laid out terms of “war” against police.

After Underwood’s killing, Facebook pledged to remove groups, accounts and pages affiliated with the far-right group from its services. But the lawsuit alleges groups tied to the boogaloo movement persist on the platform.

“We’ve banned more than 1,000 militarized social movements from our platform and work closely with experts to address the broader issue of internet radicalization. These claims are without legal basis,” said Kevin McAlister, a spokesman for Meta.