PORTAGE, Mich. — A Michigan man sought in the murder of his 82-year-old father has been arrested.

56-year-old Scott Sterffy was taken into custody July 31, in Kalamazoo. An arraignment is scheduled to be held Monday, Aug. 2. 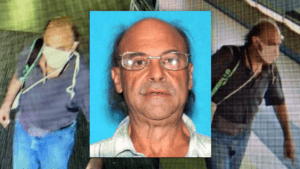 The Portage Department of Public Safety says open murder charges have been authorized against Sterffy in connection to the death of his father, Dr. Thomas Aye.

Authorities say the murder investigation started when officers were called to a home on Glencove Court for a report of an unresponsive man around 7 p.m. on July 24.

When police arrived at the scene, they found Dr. Thomas Aye dead.

According to officers, evidence at the scene was suspicious in nature and indicated signs of violence.

Aye’s son, Scott Sterffy is accused of murdering him.

Detectives say Sterffy left the state after the murder and had been seen in Chicago and Seattle.

This story was originally published July 30, 2021, by WMXI in West Michigan.