TRACYS LANDING, Md. (WMAR) — A 911 call led to the discovery of a woman’s body Sunday afternoon in Tracys Landing.

The boyfriend of Juanita Naomi Koilpillai initially called police to the 6300 block of Genoa Road to report her missing.

Police also noticed that Koilpillai’s car had been stolen. It later turned up in Leesburg, Virginia. 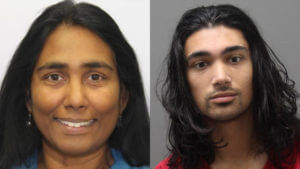 Officials say blood and other evidence found in and outside the home indicate she was the victim of a targeted murder.

An autopsy determined Koilpillai died of multiple sharp force injuries in ruling it a homicide.

On July 30, the DNA of Koilpillai and a potential suspect was discovered on a weapon.

The DNA was traced back to Andrew Weylin Beavers, the victim’s 23-year-old son.

Police believe he murdered his mother, then hid her body outside before taking the car and fleeing to Leesburg, Virginia.

Beavers was arrested there the next day in the 39000 block of Thomas Mill Road, on charges of first and second degree murder.

It’s unclear if police ever found a motive.

This story was originally published August 2, 2021, by WMAR in Baltimore.