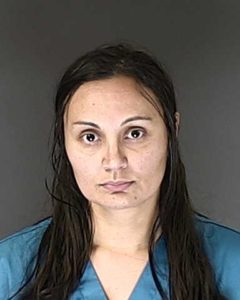 COLORADO SPRINGS, Colo. (AP) — A woman suspected of killing her missing stepson was returned to Colorado on Thursday to face charges after being arrested in South Carolina.

Letecia Stauch was arrested Monday in Myrtle Beach, South Carolina on a warrant for charges including first-degree murder of a child in the death of 11-year-old Gannon Stauch. Stauch, who did not fight extradition, arrived at the El Paso County jail in Colorado Springs Thursday morning, the El Paso County Sheriff’s Office said.

The document laying out the reasons for Letecia Stauch’s arrest was sealed and investigators and prosecutors have declined to discuss details.

It was not known if she has a lawyer representing her yet. She also faces charges including child abuse resulting in death, tampering with a deceased human body and tampering with physical evidence.

The sheriff’s office previously said that Letecia Stauch reported Gannon missing on Jan. 27, saying he left to go to a friend’s house in the afternoon. Authorities initially called him a runaway but three days later said he was considered a missing and endangered due to his age, the amount of time he had been gone and his dependence on medication.