WASHINGTON (AP) — Trump ally Steve Bannon declined to testify and his lawyers did not call any witnesses in his contempt of Congress trial on Thursday, instead arguing the judge should just acquit him, saying prosecutors hadn’t proven their case.

The decision to forego calling any witnesses in Bannon’s defense cleared the way for closing arguments to begin Friday. The judge didn’t immediately rule on the motion for an acquittal and the case is likely to end up in the jury’s hands by midday Friday. 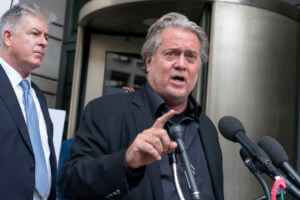 Steve Bannon accompanied by his attorney M. Evan Corcoran, speaks to the media as he departs the federal court in Washington, Thursday, July 21, 2022. Bannon was brought to trial on a pair of federal charges for criminal contempt of Congress after refusing to cooperate with the House committee investigating the U.S. Capitol insurrection on Jan. 6, 2021. (AP Photo/Jose Luis Magana)

One of Bannon’s lawyers, David Schoen, contended they should able to call Rep. Bennie Thompson, the Democratic chairman of the House Jan. 6 committee which had subpoenaed Bannon’s testimony, to question him under oath instead of the congressional lawyer who testified during the trial. The judge had previously ruled against that request.

In court, Bannon nodded and smiled as another of his lawyers, Evan Corcoran, argued that the timing of when Bannon could comply with the congressional subpoena was flexible and said testimony from the House panel’s chief lawyer, Kristin Amerling, had made clear “that the dates were in flux.”

In making the argument, Corcoran said that “no reasonable juror could conclude that Mr. Bannon refused to comply.”

Bannon’s team also told the judge that Bannon saw no point in testifying since the previous rulings had gutted his planned avenues of defense. Schoen said Bannon “understands that he would be barred from telling the true facts.”

Corcoran then rested the defense case. U.S. District Judge Carl Nichols said he would rule later on the motion for an acquittal.

Throughout the trial, Corcoran has tried to establish that the deadline for the onetime strategist to former President Donald Trump to appear before the House committee investigating the Capitol riot was flexible, as long as the two sides were on negotiating terms.

In opening statements, Corcoran argued that the charges against Bannon were politically motivated and that the former adviser was engaged in good-faith negotiations with the congressional committee when he was charged. “No one ignored the subpoena,” Corcoran told the jury.

In reality, Corcoran said, one of Bannon’s previous lawyers, Robert Costello, contacted an attorney for the House committee to express some of Bannon’s concerns about testifying.

“They did what two lawyers do. They negotiated,” Corcoran said, adding that Bannon and his legal team believed “the dates of the subpoena were not fixed; they were flexible.”

At other times in the courtroom on Thursday, Bannon, wearing two collared shirts, a T-shirt and a black jacket, fiddled with his telephone and rocked back and forth on his chair.

Bannon was in an unofficial capacity to Trump at the time of the insurrection on Jan. 6, 2021, and is charged with defying a congressional subpoena from the House committee investigating the aftermath of the 2020 election and the events leading up to the deadly riot.

Bannon was indicted in November on two counts of criminal contempt of Congress, a month after the Justice Department received the House panel’s referral. Each count carries a minimum of 30 days of jail and as long as a year behind bars upon conviction.

The Justice Department rested its case Wednesday after calling just two witnesses: Amerling, and FBI special agent Stephen Hart. The prosecution’s case was dominated by testimony from Amerling, who explained the extent to which the committee tried to engage Bannon and the timeline leading up to the missed deadline.

During cross examination Corcoran asked Amerling whether it was common for witnesses to appear before a congressional committee several weeks after the deadline date on a subpoena. Amerling answered “yes,” but added only “when witnesses are cooperating with the committee.”

Amerling said Bannon was uncooperative from the start, so there was no such leeway.

The committee heard nothing from Bannon until after the first deadline had passed, at which point his lawyer sent a letter to the committee stating that Bannon was protected by Trump’s claim of executive privilege and would not be providing documents or appearing. The committee responded in writing that Trump’s claim was invalid — Trump was no longer president, and Bannon was not employed at the White House at the time of the riot.

The panel gave Bannon a hard deadline of Oct. 14 to come before the committee. When that deadline passed, Thompson the committee chairman, wrote Bannon’s lawyer on Oct. 15 threatening criminal prosecution.

The committee, which is holding a prime time hearing Thursday, wanted to speak with Bannon because it had information that Bannon was actively involved in planning, logistics and fundraising for efforts by Trump, a Republican, to overturn the 2020 election and stop Congress from certifying Democrat Joe Biden’s victory. The subpoena demanded any documents or communications relating to Trump and other people in his orbit, including lawyer Rudy Giuliani and extremist groups such as the Proud Boys and the Oath Keepers.

The emphasis on the subpoena timeline is one of the few avenues of defense that Nichols left Bannon’s legal team after a hearing last week. Nichols ruled that major elements of Bannon’s planned defense were irrelevant and could not be introduced in court. The judge said Bannon could not claim he believed he was covered by executive privilege, which allows presidents to withhold confidential information from the courts and the legislative branch, or that he was acting on the advice of his lawyers. 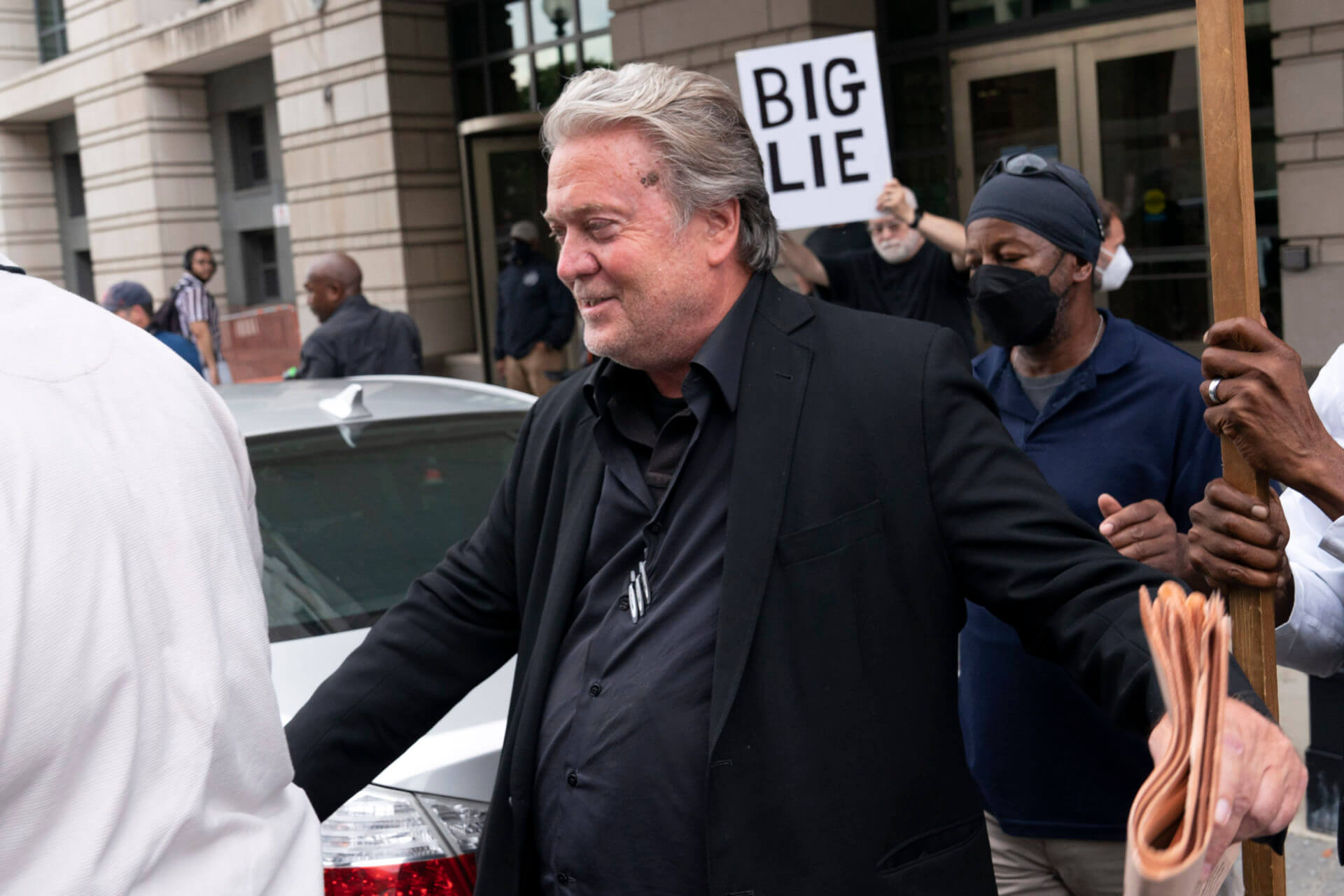 Steve Bannon departs the federal court in Washington, Thursday, July 21, 2022. Bannon was brought to trial on a pair of federal charges for criminal contempt of Congress after refusing to cooperate with the House committee investigating the U.S. Capitol insurrection on Jan. 6, 2021. (AP Photo/Jose Luis Magana)
MORE NEWS