MINNEAPOLIS (AP) — To the general public, the video of a white police officer pressing his knee into the neck of a shirtless black man prone on the street, crying out for help until he finally stopped moving, was horrifying.

Four officers were fired a day after George Floyd’s death, a stunning and swift move by the Minneapolis chief with the mayor’s full backing. But despite their dismissal, whether the incident will be considered criminal, or even excessive force, is a more complicated question that will likely take months to investigate.

The officers were dismissed soon after a bystander’s video taken outside a south Minneapolis grocery store Monday night showed an officer kneeling on the handcuffed man’s neck, even after he pleaded that he could not breathe and stopped moving.

Mayor Jacob Frey announced the firings on Twitter, saying: “This is the right call.”

The FBI and state law enforcement were investigating Floyd’s death, which immediately drew comparisons to the case of Eric Garner, an unarmed black man who died in 2014 in New York after he was placed in a chokehold by police and pleaded for his life, saying he could not breathe.

But in the Garner case, local prosecutors, the NYPD’s internal affairs unit, and the Justice Department all finished investigations into the case before the officer was ultimately fired. Garner’s family and activists spent years begging for the officer to be removed. 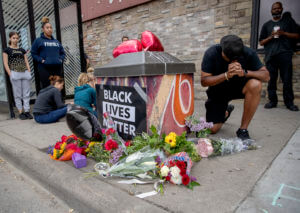 People gather and pray around a makeshift memorial, Tuesday, May 26, 2020, in Minneapolis, near the site where a black man, who was taken into police custody the day before, later died.  (Elizabeth Flores/Star Tribune via AP)

The officers in the Minneapolis incident haven’t even been publicly identified, though one defense attorney has confirmed he is representing Derek Chauvin, the officer seen with his knee on Floyd’s neck. The attorney, Tom Kelly, declined to comment further.

The police union asked the public to wait for the investigation to take its course and not to “rush to judgment and immediately condemn our officers.” Messages left with the union after the firings were not returned.

Police Chief Medaria Arradondo said the department would conduct a full internal investigation, and prosecutors will decide whether to file criminal charges against the officers involved. The Hennepin County Attorney’s Office said it was “shocked and saddened” by the video and pledged to handle the case fairly. Part of that investigation will likely focus on the intent of the officers, whether they meant to harm Floyd or whether it was a death that happened in the course of police work. The FBI was investigating whether the officers willfully deprived Floyd of his civil rights.

News accounts show Chauvin was one of six officers who fired their weapons in the 2006 death of Wayne Reyes, whom police said pointed a sawed-off shotgun at officers after stabbing two people. Chauvin also shot and wounded a man in 2008 in a struggle after Chauvin and his partner responded to a reported domestic assault. Police did not immediately respond to a request for Chauvin’s service record.

In Minneapolis, kneeling on a suspect’s neck is allowed under the department’s use-of-force policy for officers who have received training in how to compress a neck without applying direct pressure to the airway. It is considered a “non-deadly force option,” according to the department’s policy handbook.

A chokehold is considered a deadly force option and involves someone obstructing the airway. According to the department’s use-of-force policy, officers are to use only an amount of force necessary that would be objectively reasonable.

But two use-of-force experts told The Associated Press that the officer clearly restrained the man too long. They noted the man was under control and no longer fighting. Andrew Scott, a former Boca Raton, Florida, police chief who now testifies as an expert witness in use-of-force cases, called Floyd’s death “a combination of not being trained properly or disregarding their training.”

“He couldn’t move. He was telling them he couldn’t breathe, and they ignored him,” Scott said. “I can’t even describe it. It was difficult to watch.”

In a post on his Facebook page, the mayor, who is white, apologized Tuesday to the black community for the officer’s treatment of Floyd, 46, who worked security at a restaurant. 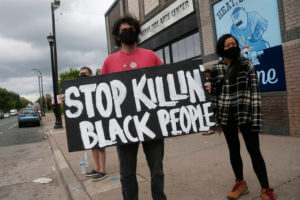 Protesters gather near the site of the death of a man, Tuesday, May 26, 2020, who died in police custody Monday night in Minneapolis after video shared online by a bystander showed a white officer kneeling on his neck during his arrest as he pleaded that he couldn’t breathe. (AP Photo/Jim Mone)

“Being Black in America should not be a death sentence. For five minutes, we watched a white officer press his knee into a Black man’s neck. Five minutes. When you hear someone calling for help, you’re supposed to help. This officer failed in the most basic, human sense,” Frey posted.

Police said the man matched the description of a suspect in a forgery case at a grocery store, and that he resisted arrest.

The video starts with the shirtless man on the ground, and does not show what happened in the moments prior. The unidentified officer is kneeling on his neck, ignoring his pleas. “Please, please, please, I can’t breathe. Please, man,” said Floyd, who has his face against the pavement.

Even in the coronavirus pandemic that has killed nearly 100,000 people in the U.S. and prompted police departments around the country to change how they’re doing work, the officers in the video aren’t wearing masks. In some cities, low-level arrests such as attempted forgery are skipped right now.

Floyd also moans. One of the officers tells him to “relax.” Floyd calls for his mother and says: “My stomach hurts, my neck hurts, everything hurts … I can’t breathe.” As bystanders shout their concern, one officer says, “He’s talking, so he’s breathing.”

But Floyd slowly becomes motionless under the officer’s restraint. The officer does not remove his knee until the man is loaded onto a gurney by paramedics.

Several witnesses had gathered on a nearby sidewalk, some recording the scene on their phones. The bystanders become increasingly agitated. One man yells repeatedly. “He’s not responsive right now!” Two witnesses, including one woman who said she was a Minneapolis firefighter, yell at the officers to check the man’s pulse. “Check his pulse right now and tell me what it is!” she said.

The Hennepin County medical examiner identified Floyd but said the cause of death was pending.

Floyd had worked security for five years at a restaurant called Conga Latin Bistro and rented a home from the restaurant owner, Jovanni Thunstrom.

He was “a good friend, person and a good tenant,” the restaurateur told the Star Tribune. “He was family. His co-workers and friends loved him.”

Protesters filled the intersection Tuesday evening in the street where Floyd died, chanting and carrying banners that read, “I can’t breathe” and “Jail killer KKKops.” They eventually marched about 2 1/2 miles to a city police precinct, with some protesters damaging windows, a squad car and spraying graffiti on the building. 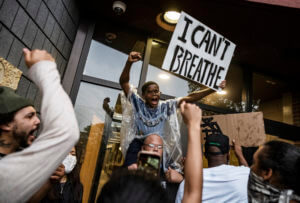 People gather at a police precinct during a protest for George Floyd in Minneapolis on Tuesday, May 26, 2020. (Richard Tsong-Taatarii/Star Tribune via AP)

A line of police in riot gear eventually confronted the protesters, firing tear gas and projectiles. Some protesters kicked canisters back toward police. Some protesters stacked shopping carts to make a barricade at a Target store across the street from the station, and though steady rain diminished the crowd, tense skirmishes stretched late into the evening.

Ben Crump, a prominent civil rights and personal injury attorney, said he had been hired by Floyd’s family.

The death came amid outrage over the death of Ahmaud Arbery, who was fatally shot Feb. 23 in Georgia after a white father and son pursued the 25-year-old black man they had spotted running in their subdivision. More than two months passed before charges were brought. Crump also represents Arbery’s father. 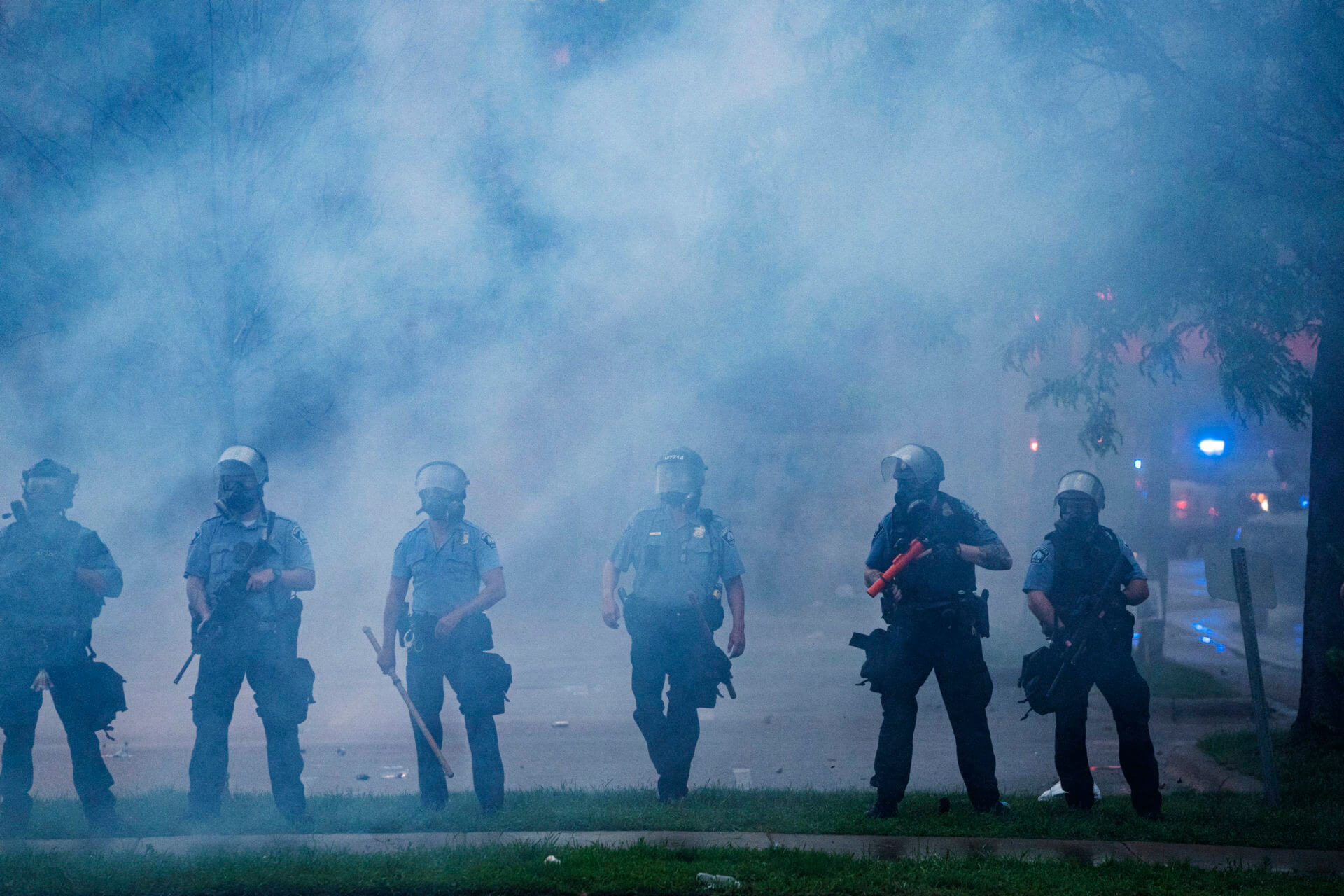 Police officers deploy to disperse protesters gathered for George Floyd in Minneapolis on Tuesday, May 26, 2020. Four Minneapolis officers involved in the arrest of the black man who died in police custody were fired Tuesday, hours after a bystander’s video showed an officer kneeling on the handcuffed man’s neck, even after he pleaded that he could not breathe and stopped moving. (Richard Tsong-Taatarii/Star Tribune via AP)
MORE NEWS