MEMPHIS, Tenn. (AP) — A grand jury has declined to indict police officers after an investigation by Tennessee’s police agency into the violent arrest of a Black man for alleged traffic violations, a district attorney said Wednesday.

Members of a grand jury in Fayette County reviewed evidence Monday related to the July arrest of Brandon Calloway, but the panel “elected to take no action regarding the actions of the officers,” said Mark E. Davidson, the rural county’s top prosecutor. 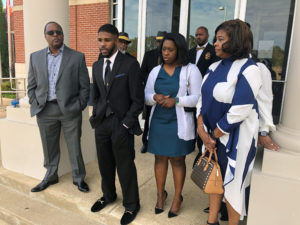 FILE – Brandon Calloway, second from left, speaks with a reporter alongside his family about his violent arrest in July for alleged traffic violations on Oct. 24, 2022, in Somerville, Tenn. Also pictured are Calloway’s father, Ed Calloway, left, sister Raven Calloway, second from right, and mother, Dinishia Calloway, right. A grand jury declined to indict police officers after an investigation by the state’s police agency into the violent arrest of Brandon Calloway, a district attorney said Wednesday, Nov. 30, 2022. (AP Photo/Adrian Sainz, File)

Calloway told The Associated Press in October that he was stopped because he was a young Black man driving a nice car. He has said he would not have been stopped in the 2020 Chevrolet Camaro he was driving if he was white.

Calloway was arrested by Oakland police and charged with disregarding a stop sign, speeding, disorderly conduct and evading arrest. Video footage of the confrontation leading up to the arrest, which spread on social media, shows officers chasing him through his home, attempting to stun him, and beating him bloody before dragging him away.

According to a police affidavit, Calloway drove through a stop sign about 7:30 p.m. on July 16. He was then clocked driving 32 mph in a 20 mph zone (51 kph in a 32 kph zone) before an officer attempted a traffic stop. Calloway continued driving until he reached a house, where he pulled into the driveway and ran inside, the affidavit said.

The affidavit says that later Calloway and others were outside speaking with the first officer when a second officer arrived. The officers said they needed to detain Calloway, and he ran back inside the house. The officers kicked down the front door and followed Calloway upstairs, where he ran into a room and locked the door. Officers then kicked down that door, used a stun gun on him and began to hit him with a baton, the affidavit said.

One police officer was placed on paid leave while the Tennessee Bureau of Investigation investigated. The state police agency then gave its report to Davidson before his office presented the evidence to the grand jury.

The confrontation happened in Oakland, a small town about 30 miles (50 kilometers) east of Memphis. Calloway, who runs a notary public business, said the beating left him with stitches in his head, speech problems and memory loss.

His lawyer, Andre C Wharton, said Wednesday that they are “extremely disappointed in this outcome.” Wharton said he hopes the U.S. Department of Justice will “fully review this matter for possible institution of criminal prosecution.”

“Meanwhile, we will not rest, nor sit still, but will continue to stand with Brandon in our quest for justice,” Wharton said.