Melissa A. Blair, 38, of Englewood, is not an employee at McMinn County Central High School but is a parent and involved in booster clubs, news outlets reported. 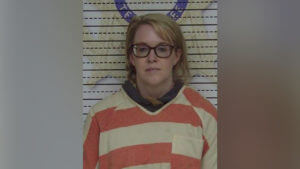 The encounters happened from spring 2020 through late 2021, officials allege. Sheriff Joe Guy said two of the students have since become adults.

The county school system has banned her from school property and activities.

Blair was indicted Tuesday on 18 counts of aggravated statutory rape, four counts of human trafficking by patronizing prostitution and one count of solicitation of a minor.

Guy said it appeared Blair was talking to the teens on social media, trading items for sexual encounters.

She turned herself in Tuesday and was booked into jail. It wasn’t known whether she was represented by a lawyer who could comment on her behalf.