DENVER (AP) — The older brother of a 13-year-old boy who disappeared in Colorado in 2012 confronted his father about photos of him eating feces from a diaper months before his younger sibling went missing, the boy’s brother testified Thursday.

The father, Mark Redwine, is being tried in the killing of his son, Dylan Redwine. The boy disappeared in the Vallecito area near Durango during a court-ordered visit during his Thanksgiving break, authorities said. Mark Redwine told investigators he left his son alone at home to run errands and returned to find him missing, The Denver Post reported.

Prosecutors argued this week that Mark Redwine killed his son over photographs that triggered a fatal outrage. The photos, accidentally discovered by the two boys on their father’s computer during a road trip in 2011, depict Mark Redwine wearing women’s underwear and a diaper, and eating feces from a diaper.

While their father slept, the siblings looked at the photos in a locked bathroom and Cory took his own photos to save on his phone.

During cross-examination, Cory Redwine said he sent copies of the compromising photos to his father in August 2012, while Dylan and Mark Redwine were alone on a trip together. Dylan knew about the photos and was not harmed on that trip, despite the texting confrontation between Cory and Mark Redwine.

Cory called his father an “(expletive)-eating coward” and said “you are what you eat,” according to text messages revealed Thursday in court.

In response, Mark Redwine texted back “not to hurt Dylan,” public defender John Moran said. The father also called Cory a thief for taking the photos and said he was “trying to hurt him” just like his mother, who was in a contentious custody battle with him at the time.

On Wednesday, Cory had testified that the accidental discovery of photos ruined Dylan’s relationship and image of his father.

“Dylan lost any reason for him to look up to Mark that day,” Cory Redwine said.

On Monday, Fred Johnson, special deputy district attorney, suggested that on the night he was killed, Dylan Redwine may have mentioned or shown his father the photographs, triggering his father to become violent.

Defense attorneys for Mark Redwine said the photos have no connection to Dylan Redwine’s death and suggested the the boy ran away from home. His remains were found a few miles from his father’s house in 2013.

Cory Redwine told the court his younger brother was “pretty disgusted” and said he wanted to use the photos as leverage in an argument with his dad a year later. 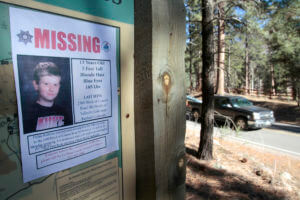 FILE – In this Nov. 26, 2012, file photo, a missing poster of 13-year-old Dylan Redwine hangs on a trail head sign next to Vallecito Reservoir in Vallecito, Colo. Opening statements are expected sometime Monday, June 21, 2021, in the delayed trial of a man accused of killing his 13-year-old son in southwest Colorado nearly a decade ago. Dylan Redwine disappeared during a court ordered Thanksgiving visit in 2012 and his remains were later found. (Shaun Stanley/The Durango Herald via AP, File)

“Hey send me those poop pics of Papa because he gave me a speech about you guys being a bad example and I want to show him who he really is,” said Dylan Redwine in a text to his older brother in August 2012, according to court documents.

Cory Redwine said he did not send the pictures and it was unclear from his testimony if his brother had confronted his father regarding the photos.

The brothers’ mother, Elaine Hall, testified Wednesday that she sent Dylan Redwine to his father’s house on Nov. 18, 2012, learned he was missing the next day and immediately drove six hours to La Plata County to search for her son. Hall said during cross-examination that she had no knowledge of her son confronting his father about the photos.

“He wouldn’t just leave,” she wrote. “He would have called me. I am so suspect of you right now. How could he just disappear?”

Public defender Justin Bogan questioned Hall about her suspicions of Mark Redwine, suggesting that her perspective was tainted by their contentious divorce and custody battle.

Hall had appeared on the “Dr. Phil” television show in 2013 and made her suspicions about the father public. Bogan also suggested that Hall turned public opinion against her ex-husband and influenced the direction of the police investigation.

But Hall defended her actions, saying she spoke with media and attended a protest at Mark Redwine’s house in an effort to bring Dylan home.

“I was frantic,” she said. “It was so surreal. You don’t expect anything like this to happen to you. I figured he was safe because he was with his dad, and I was devastated that no one knew where my son was.”

Mark Redwine, who has pleaded not guilty, was arrested after a grand jury indicted him in July 2017.

He was accused of second-degree murder and child abuse resulting in death. He faces up to 48 years in prison if found guilty.