He and his half-brother Zachary tormented their adoptive, widowed mother, Lynda. By the time Cruz reached middle school in the early 2010s, the pair took their fists and baseball bats to the walls, leaving gaping holes. They destroyed televisions and carved gashes in furniture, witnesses said.

Zachary may have been two years younger, but he was bigger and stronger and relentlessly picked on his brother — one social worker remembered Zachary climbing atop a counter and stepping in Nikolas’ cereal as he ate.

Lynda Cruz called sheriff’s deputies to the family’s 4,500-square-foot (420-square-meter) home at least two dozen times between 2012 and 2016 to deal with one son, the other or both. Most calls were for fighting, destroying her property, disrespecting her or running away.

“Nikolas was very easily set off and I think Zachary derived some pleasure from pushing Nikolas’ buttons,” testified Frederick Kravitz, one of Cruz’s childhood psychologists. In turn, “they were very good at pushing (their mother’s) buttons.”

Nikolas Cruz, 23, pleaded guilty in October to murdering 17 students and staff members at Parkland’s Marjory Stoneman Douglas High School on Feb. 14, 2018. His trial is only to decide whether he is sentenced to death or life without parole. The trial resumes Monday after a week off.

In an attempt to counter that, assistant public defender Melisa McNeill and her team have made Cruz’s history their case’s centerpiece, hoping at least one juror will vote for life. A death verdict must be unanimous.

The defense wants to show that from Cruz’s birth to a hard-drinking, crack-smoking Fort Lauderdale prostitute, he never fully received needed help even as he grew increasingly out of control.

And nowhere was that more apparent than in the home Roger and Lynda Cruz built in Parkland, an upscale Fort Lauderdale suburb. They adopted Nikolas at birth in 1998 and, in 2000, Zachary, who had a different birth father.

Lynda Cruz, who turned 50 shortly after adopting Nikolas, was a stay-at-home mom. Roger Cruz, then 61, owned a successful marketing business.

Lynda Cruz “had wanted a child, always wanted a child. So once she got Nikolas, she felt like her family was complete,” friend Trish Davaney-Westerlind testified. “He was a cute little baby. She would go and get him all these sailor outfits. She was just the happiest I ever saw.” 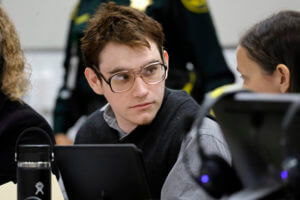 But by preschool, Cruz showed extreme behavior. Neighbors and teachers testified he hit and bit other children and didn’t socialize. He was anxious, fell when he ran and couldn’t use utensils. Nikolas started seeing psychiatrists and psychologists at age 3 and didn’t fully talk or become potty trained until 4.

At 5, just as Cruz entered kindergarten, he witnessed his father suffer a fatal heart attack in the family’s den. That left Lynda Cruz alone in her mid-50s with two sons who would have challenged a much younger couple.

Unemployed, she became paranoid about spending, keeping her air conditioners’ thermostats in the 80s (25 to 30 Celsius) and unplugging unused appliances. One friend said her monthly electric bill was $80, a fraction of what the owner of a large South Florida home typically pays.

She padlocked the refrigerator so her sons couldn’t eat without permission and kept it so poorly stocked neighbors gave her groceries.

Friends gave conflicting testimony over whether Lynda Cruz really was financially strapped or had wealth she didn’t want to spend.

In either case, she had expenses other parents didn’t. Cruz’s mental health treatments weren’t fully covered by insurance. He loved online, often violent video games, but hated losing – that’s what caused him to destroy TVs and damage walls. She sometimes locked his video game counsel in her car as punishment — and Cruz at least once broke a window to get it back.

“She was a little afraid of him,” neighbor Paul Gold testified.

Despite Cruz’s tantrums, Lynda Cruz told teachers and counselors he was gentle and loving, a mama’s boy. Friends testified that wasn’t wholly a facade — Cruz and his mother did have a strong, often affectionate attachment and she favored him over his brother.

Still, Zachary remained popular in the neighborhood while Cruz was the outcast — and not just with children.

Steven Schusler testified that shortly after moving nearby, his landlord called over the Cruz boys and pointed at Nikolas, then about 10.

“He’s the weird one, aren’t you Nicky?” Schusler recalled the woman saying. Cruz ”curled up” and “looked like a snail when you put salt on one.”

But Cruz’s behavior was often strange and sometimes violent. When he was 9, a parent called police after he hit her child in the head with a rock. When his dog died after eating a poisonous toad, he went on a killing spree against the amphibians. At middle school, his outbursts disrupted classes and he plastered his homework with racist slurs, swastikas, obscenities and stick figures having sex or shooting each other.

Lynda Cruz became so overwhelmed in Cruz’s early teens, a social services agency was assigned to help. That’s what brought case manager Tiffany Forrest to the home. She said Lynda Cruz complained Nikolas wouldn’t bathe, so Forrest tried to explain to him the importance of hygiene. Cruz stood up, walked outside and jumped clothed into the pool. He then climbed out.

“I showered,” he told Forrest.

In the coming weeks, Cruz’s attorneys are expected to present testimony about his transfer to a school for students with emotional and behavioral problems, his time at Stoneman Douglas and call his brother to the stand. Zachary now lives in Virginia with two benefactors.

Their mother died less than four months before the shooting.