KEENESBURG, Colo. (AP) — The Wild Animal Sanctuary in Keenesburg, Colorado, has for several years been home to dozens of animals rescued from the roadside zoo in rural Oklahoma featured in the newly released Netflix documentary, “Tiger King: Murder, Mayhem and Madness.”

Thirty-nine tigers and three black bears from Joe Exotic’s G.W. Zoo were brought to the sanctuary in Weld County and have been cared for since their rescue in 2017, KDVR-TV reported. 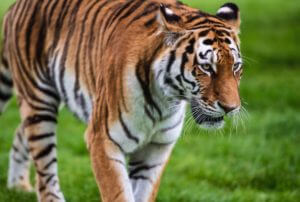 “We can’t put these animals back in the wild, so we are giving them as much open space and as much freedom as they can possibly have,” said Becca Miceli, the chief science and animal welfare officer.

The Wild Animal Sanctuary never publicized the rescue because of ongoing litigation but has recently decided to educate people while the documentary is in the limelight.

The 700-acre property has been around for about 40 years and is currently home to 550 animals. There are also more than 10,000 acres in southern Colorado for a Wild Animal Refuge.

“Here, we specialize in large carnivores, we individualize our care to each animal. Everybody’s been pretty happy, healthy, doing pretty well. They had a 2-year mark recently, 2 years of being here, which is great,” Miceli said. “Some of the kiddos that came from the facility, it was a harder transition, some had some of the psychological stress that we can see a lot of times on rescues.”

Some had nutritional deficiencies, some had dental issues, orthopedic issues, Miceli said.

Employees at the sanctuary hope Joe Exotic and the wild cast in the documentary will show people a new appreciation for what they are doing.

“I’d like the world to know through the popularity of this documentary that these animals endure a lot,” Miceli said. “I think one of the best things you can see in this industry when you’re working next to these animals, trying to make their lives better, is that: that’s joy, happiness, freedom.”