CRIPPLE CREEK, Colo. (AP) — Prosecutors said Friday that a Colorado man accused of beating his fiancee to death with a baseball bat and burning her body on his ranch consistently manipulated those around him, while the defense countered that their client had no motive and noted the woman’s body has not been found.

A jury was seated earlier in the day for the trial of Patrick Frazee, 33, who pleaded not guilty to first-degree murder in the death of Kelsey Berreth, 29. Berreth was last seen nearly a year ago with the couple’s daughter near her home in Woodland Park, a mountain community of 7,500 people about two hours south of Denver. Several searches, including one at a landfill, did not turn up any sign of her. 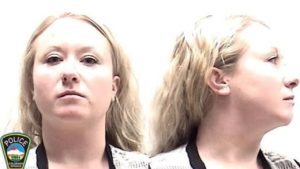 Attorneys on both sides focused much of their opening statements on Krystal Kenney, a former Idaho nurse who pleaded guilty to evidence tampering for moving Berreth’s cellphone. Kenney, who was in a relationship with Frazee, has agreed to testify against him under a plea deal.

“All you gotta do is hit her in the head and put her in the trash can,” Frazee told Kenney, according to Viehman. The prosecutor added that Frazee killed Berreth in her home and then texted Kenney that she had “a mess to clean up.”

Frazee also is accused of burning the body on his family’s property after Kenney refused to drive it to Idaho.

But defense attorney Ashley Porter questioned Kenney’s honesty, saying she lied to the FBI by denying she knew Berreth.

“What they did not tell you is that Krystal did not go to police voluntarily. They had to track her down. … Before she says anything about this case, she cuts a deal, where she could spend zero days in jail,” Porter told jurors.

Cheryl Berreth, Kelsey Berreth’s mother, testified Friday that her daughter’s relationship with the Frazee family was never good, and she said the family viewed her as a “hooker” because she would arrive at their property late at night because of her work hours.

The relationship worsened after Kelsey Berreth told the family about her pregnancy in the summer of 2017, Cheryl Berreth said.

Kelsey Berreth, who worked as a flight instructor, was last seen on grocery store surveillance footage that shows her toting a baby carrier holding her 1-year-old daughter. Frazee told police he and Berreth, who did not live together, met later that day to exchange their daughter.

Prosecutors have not offered a motive for Frazee to kill Berreth, but her parents argue in a wrongful death lawsuit that they believe he wanted full custody of the couple’s toddler daughter. The child has remained with them while the criminal case proceeds.

Frazee would be sentenced to life in prison without parole if he is convicted of first-degree murder.