BOULDER COUNTY, Colo. (KOAA) — A jury must decide whether or not a man obstructed police officers when he pulled out his phone and livestreamed the deadly shooting at a King Soopers in Boulder last March.

Dean Schiller’s trial for police obstruction charges started Tuesday. During court, the jury heard testimony from three officers who responded to the scene. 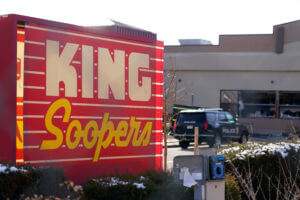 Emily Giffen, an employee of three years at the Table Mesa King Soopers who was working inside the store at the time of the shooting, said she’s hoping for justice in this case.

“I was right outside the front door. I witnessed two of the people at the entrance way that were shot,” she said, adding that many of those who were fired upon that day were her friends. “Everybody there was very close, we all really cared about each other.”

Tuesday, Dean Schiller, the man who livestreamed the shooting and subsequent police response, stood before a jury at the Boulder County Justice Center.

“While we were running for our lives, and scared, you’re recording a shooting,” said Giffen.

“Putting something like that on Facebook for the world to watch while we’re all horrified was just a very disgusting thing to do,” Giffen said. 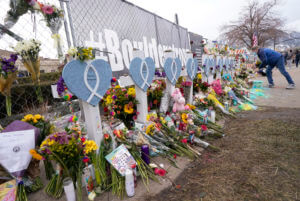 Clint Cooper places a tribute to the victims amid the crosses put up along the temporary fence around the parking lot of a King Soopers grocery store Thursday, March 25, 2021, in Boulder, Colo. Ten people were killed in a mass shooting at the supermarket on Monday. (AP Photo/David Zalubowski)

Prosecutors said Schiller was distracting police officers when he had his phone out and was recording the scene. In court, prosecutors played the livestream video taken by Schiller and in it, you can hear police officers repeatedly telling him to back away or leave the scene.

Schiller would often times yell back. In some cases he would move back but did not leave the scene.

The defense argued that Schiller was listening to police officers and backing away from them when they ordered him to. They said he was not preventing officers from doing their job and said even though Schiller’s actions may have been abrasive they did not rise to a criminal level.

“That video caused so much pain, and it still causes a lot of pain,” added Giffen.

Schiller’s case will resume Wednesday, the jury will hear from more witnesses.

A verdict is expected to be announced later that day.

The Boulder King Sooper’s shooting suspect remains mentally incompetent to stand trial, something that has been a hard pill to swallow for Emily. She said she just wants justice for her King Sooper’s family.

“I just hope that we can get that soon. It’s a little bit of closure that I think we all really need,” said Giffen.

This story was originally published Oct. 26, 2022 by KOAA in Colorado Springs, an E.W. Scripps Company.