ATLANTA (AP) — The killing was captured on video and shared around the world: Ahmaud Arbery running toward and then around an idling pickup truck before its driver blasted him at close range with a shotgun.

Soon after Travis McMichael fatally shot Arbery on Feb. 23, 2020, his father, Greg McMichael, told police how the pair had armed themselves, chased the young Black man and trapped him “like a rat.” Neighbor William “Roddie” Bryan told officers he joined the pursuit and helped cut off Arbery’s escape.

After a 13-day trial at the Glynn County courthouse in coastal Georgia, a disproportionately white jury found the three white men guilty of murder. Each man was also convicted on lesser charges.

ON WHAT CHARGES WAS EACH MAN CONVICTED?

HOW MUCH PRISON TIME ARE THEY FACING?

Malice and felony murder convictions both carry a minimum penalty of life in prison. The judge decides whether that comes with or without the possibility of parole. Even if the possibility of parole is granted, a person convicted of murder must serve 30 years before becoming eligible. Multiple murder convictions are merged for the purposes of sentencing.

Murder can also be punishable by death in Georgia if the killing meets certain criteria and the prosecutor chooses to seek the death penalty. Prosecutors in this case did not. 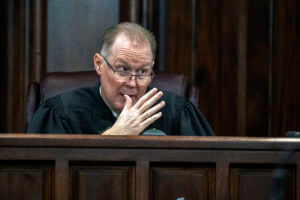 Superior Court Judge Timothy Walmsley clarifies a jury request to view a short video clip as part of their deliberation during the trial of Greg McMichael, his son Travis McMichael, and neighbor, William “Roddie” Bryan, Wednesday, Nov. 24, 2021, in the Glynn County Courthouse in Brunswick, Ga. The three are charged with the February 2020 slaying of 25-year-old Ahmaud Arbery. (AP Photo/Stephen B. Morton, Pool)

Each count of aggravated assault carries a prison term of at least one year but not more than 20 years. False imprisonment is punishable by a sentence of one to 10 years in prison.

WHEN WILL THEY BE SENTENCED?

WILL THERE BE APPEALS?

One likely basis for appeal could be the exclusion of certain evidence from the trial, he said. Defense attorneys had sought to introduce evidence of Arbery’s criminal record, records on his mental health and the fact that he was on probation. They also wanted to have a use-of-force expert testify. But the judge ruled against admitting any of that evidence.

“They’ll argue that relevant evidence helpful to the defense was excluded by the trial judge and that was an error,” Carlson said.

It’s also possible that appellate attorneys could find other grounds for appeal after scouring transcripts and jury instructions, and speaking with jurors. 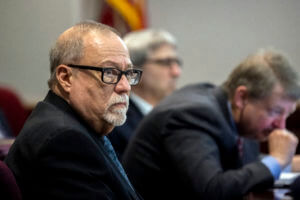 FILE – Greg McMichael, left, listens to jury selection for the trial of him and his son, Travis McMichael, and a neighbor, William “Roddie” Bryan, at the Glynn County Courthouse, Monday, Oct. 25, 2021, in Brunswick, Ga. Greg McMichael, the man who pursued Ahmaud Arbery with his son, has been convicted of murder, Wednesday, Nov. 24. The conviction carries a minimum sentence of life in prison. (AP Photo/Stephen B. Morton, Pool, File)

Months before the three stood trial on state murder charges, a federal grand jury in April indicted them on hate crimes charges. It’s an entirely separate case that’s not affected by the state trial’s outcome.

U.S. District Court Judge Lisa Godbey Wood has scheduled jury selection in the federal trial to start Feb. 7. All three men are charged with one count of interference with civil rights and attempted kidnapping. The McMichaels were also charged with using, carrying and brandishing a firearm during a crime of violence.

The federal indictment says the men targeted Arbery because he was Black.

Find all of Court TV’s coverage of the case here: 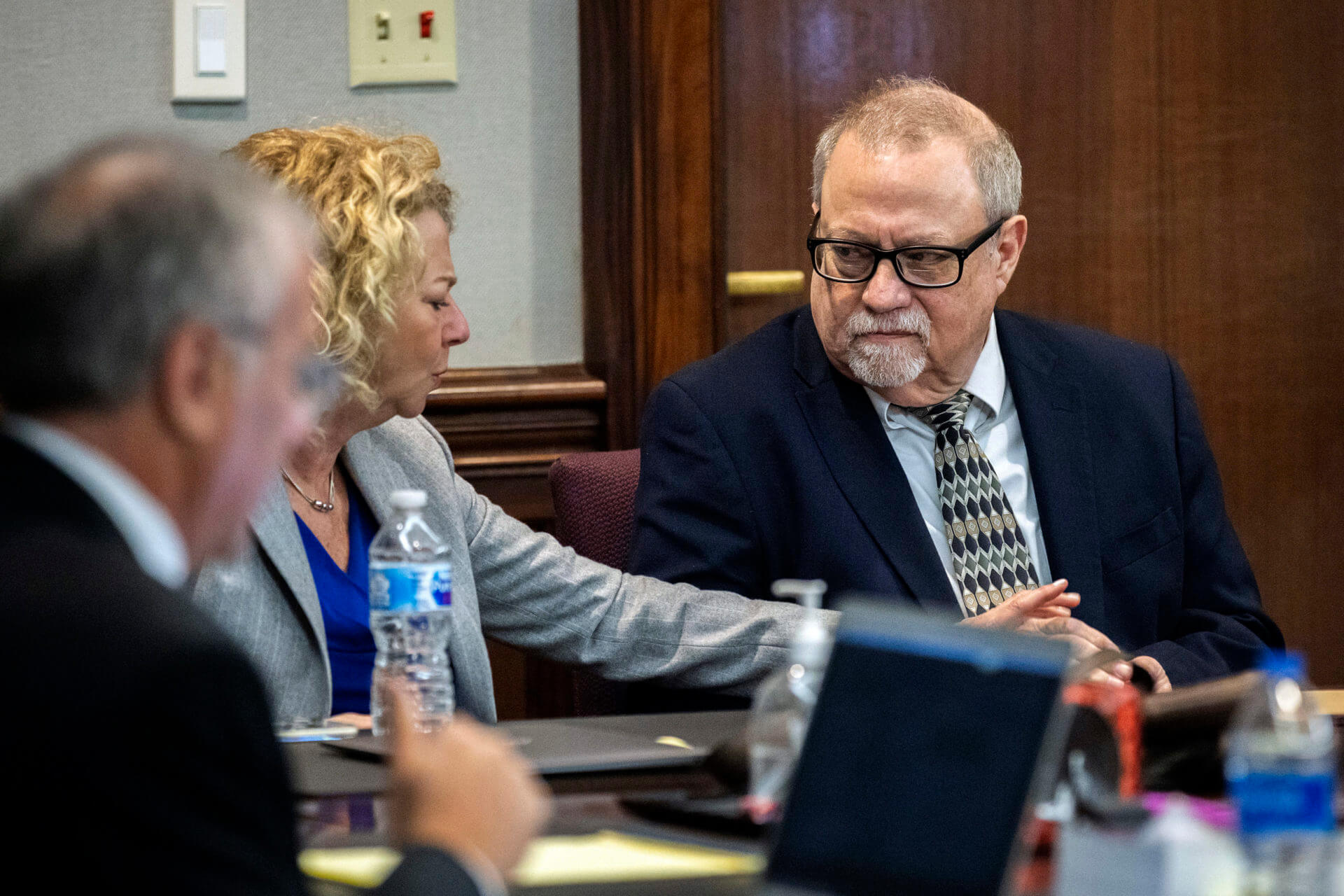 Defense attorney Laura Hogue, center, touches the hand of her client Greg McMichael, right, while they wait for the jury to come into to the courtroom during the trial of McMichel and his son, Travis McMichael, and a neighbor, William "Roddie" Bryan in the Glynn County Courthouse, Wednesday, Nov. 24, 2021, in Brunswick, Ga. The three are charged with the February 2020 slaying of 25-year-old Ahmaud Arbery. (AP Photo/Stephen B. Morton, Pool)
MORE NEWS