CLARKSTON, Mich. (WXYZ) — Two teens face the possibility of life in prison for the murders of two Highland Township, Michigan teens. Jesse Wright and Steven Morrow, both 18 years old, have been charged. 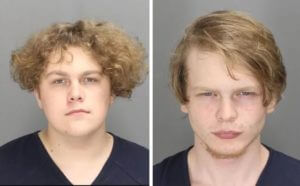 “I’ll never have my baby back, ever,” she sobbed. “But I do feel like justice so far is being served, and I really would like to commend the White Lake Police Department.”

Investigators said the four teens agreed to go to a wooded area of the park near a pond. Police identified Morrow as the triggerman and Wright as the getaway driver.

“But I know that Steven (Morrow) was on that camera looking in my windows the day before and spending quite a lot of time at my house. I’ve heard that. I think that there was just a bit of envy or jealousy there for some reason and that’s very sad and I think mental health problems had to exist before then because normal people don’t do this,” she said.

Duckworth said the judge denying bond for both suspects was “the best choice.”

Wright and Morrow are due back in court June 7 for a probable cause hearing.

This story was originally published May 25, 2022 by WXYZ in Detroit, an E.W. Scripps Company.