CATONSVILLE, Md. (WMAR) — Court documents reveal two students have been charged in connection to a shooting that occurred Tuesday in the parking lot of Catonsville High School in Baltimore County.

Police say it all started when two students left school and headed out to the parking lot to get in their car.

They noticed a white Volvo parked behind their vehicle with two people inside. 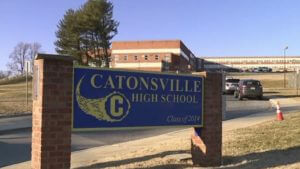 One victim told police that both individuals inside the Volvo were masked and armed with guns.

Charging documents suggest a large fight then broke out between the victims and the two males in the Volvo, with others later joining in.

That resulted in one victim being shot.

About 45 minutes after fleeing the shooting scene, the Volvo showed up at an area hospital to drop off another person who had been shot.

A third individual in the Volvo, a 16-year-old boy, was also charged with attempted first degree murder in relation to the shooting.

It’s still unclear how the person dropped off at the hospital in the Volvo was shot, and by who.

Following the arrests of both students, Baltimore County Public Schools Superintendent Darryl Williams issued a statement saying in part, “Gun violence, other violent acts, and dangerous behaviors in or around our schools are unacceptable. These acts jeopardize the sense of safety and security that school buildings and communities provide for our more than 111,000 students. Anyone who threatens the safety of our school community will be dealt with swiftly.”

This story was originally published Feb. 10, 2022, by WMAR in Baltimore, an E.W. Scripps Company.