The University of Michigan has reached an agreement to settle a lawsuit brought by students who sought to force changes in how the school protects the campus from sexual misconduct.

As part of the deal, which was filed in federal court on Thursday, the Ann Arbor school will create and pay for a multidisciplinary standing committee designed to protect the university community from and prevent sexual abuse. 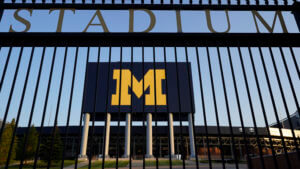 FILE – The University of Michigan football stadium is shown in Ann Arbor, Mich., Thursday, Aug. 13, 2020. The University of Michigan has reached an agreement to settle a lawsuit brought by students who sought to force changes in how the school protects the campus from sexual misconduct. The deal was filed in federal court on Thursday, March 24, 2022. (AP Photo/Paul Sancya)

The Coordinated Community Response Team will be comprised of about 30 members, including Title IX and campus sexual misconduct experts, community members and select members of the administration and faculty.

“But I think most importantly, it has representation from students and survivors,” said Nancy Cantalupo, an assistant professor of law at Wayne State University. “They will all have a seat at the table alongside the other experts that are on the CCRT.

The school has been rocked by allegations that began to publicly surface in 2020 from hundreds of men who said they were sexually assaulted by the late Robert Anderson, a campus doctor who spent nearly 40 years at Michigan. He died in 2008. In January, the school announced a $490 million settlement with Anderson’s accusers — a separate legal action from the class-action suit brought by Josephine Graham, a University of Michigan senior. Both agreements were reached under the supervision of a court-appointed mediator, the school said.

In addition, Mark Schlissel was removed earlier this year as university president after emails detailing an alleged inappropriate sexual relationship between him and a subordinate were discovered. And the university paid $9.25 million to eight women who reported emotional or sexual abuse by Martin Philbert, who over 25 years rose from professor to provost, Michigan’s senior academic official. He was removed in 2020.

“We know there is broken trust at this school,” said Graham, whose suit, filed in 2021, did not seek monetary relief.

The core of the settlement, which still requires the approval of U.S. District Court Judge Victoria Roberts, is the creation of the CCRT, which plaintiffs’ attorneys said are widely recognized by experts as an indispensable tool in the fight to prevent campus sexual violence.

Michigan’s full CCRT will meet at least three times a year to “assess, plan, monitor and evaluate sexual misconduct prevention and response efforts,” the university said in a statement.

It will be co-chaired by an external adviser, a faculty member and the university’s executive director of the Equity, Civil Rights and Title IX Office.

The latter, Tamiko Strickman, who also serves as a special adviser to school President Mary Sue Coleman, said a review of existing Coordinated Community Response Teams elsewhere led her to one at the University of California, Berkeley, which she views as a model for University of Michigan.

“Many that we found which had CCRTs were smaller, and Berkeley was a very comparable, we thought, institution to look at,” Strickman said. “So, spent a lot of time learning about their CCRT.”

“There are a lot of untapped areas that we can really capitalize upon with the CCRT,” she said.

Strickman said the team could “take a deeper dive into” academic research and “use that information to strengthen resources across campus.”

For example, she said, the CCRT might examine studies on why under-represented people are less likely to report sexual misconduct and perhaps recommend to Michigan’s administration that a therapist be embedded within residence halls.