SALT LAKE CITY (AP) — A Utah man pleaded guilty Tuesday to fatally shooting his mother and three siblings when he was a teenager in 2020.

Colin “CJ” Haynie, now 19, killed his his mother and one of his sisters as they returned from her school pickup, then waited for two more siblings to arrive home and killed them, prosecutors said. 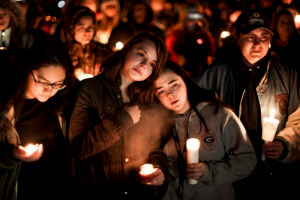 FILE – Caprice Cortez, Faith Goodsell, Autumn Barton and Mykaylla Darrow, all teammates on the Grantsville High School girls soccer team that Alexis Haynie played on, stand together at a candlelight vigil for the Haynie family at City Park in Grantsville, Utah, on Jan. 20, 2020. Colin “CJ” Haynie pleaded guilty Tuesday, July 19, 2022, to killing his mother and three siblings when he was a teenager in 2020. (Spenser Heaps/The Deseret News via AP, File)

His father came back to the home later that evening and was shot in the leg but survived after wrestling the gun away from his son.

After the father subdued him, the then 16-year-old said that he had planned to kill everyone in his family at their home in the small town of Grantsville, near Salt Lake City, authorities said.

Authorities have said they don’t know his motive.

CJ Haynie pleaded guilty to four counts of aggravated murder and one count of attempted murder on Tuesday. Several other weapons charges were dismissed in the plea agreement, court documents show.

He had been charged as an adult by prosecutors because of the seriousness of the Jan. 17, 2020 crime. 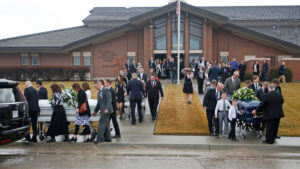 FILE – The caskets for Consuelo Alejandra Haynie, daughters 12-year-old Milan and 15-year-old Alexis, and 14-year-old son Matthew are carried following their funeral services on Jan. 24, 2020, in Grantsville, Utah. Colin “CJ” Haynie pleaded guilty Tuesday, July 19, 2022, to killing his mother and three siblings when he was a teenager in 2020. (AP Photo/Rick Bowmer, File)

The victims were his mother, Consuelo Alejandra Haynie, 52; his sisters Milan and Alexis, ages 12 and 15; and his 14-year-old brother Matthew.

The family’s oldest child, Danny Haynie, was not home at the time of the shootings. At a funeral for the family members in 2020 at their local Church of Jesus Christ of Latter-day Saints’ congregation, Danny Haynie said that CJ Haynes was still loved and part of the family.

Sentencing is scheduled for Dec. 7. Aggravated murder in Utah typically carries the possibility of the death penalty, but state prosecutors cannot seek it for people convicted of crimes that happened when they were under 18 even if their their cases are moved to adult court.

So Haynie faces a prison sentence of 25 years to life for each aggravated murder conviction under state law.