SALT LAKE CITY (KSTU) — A Utah man who has previously been arrested for allegedly sexually assaulting a child, voyeurism and lewdness was arrested again this week for possession of child pornography.

Following Tuesday’s arrest, Jonathan Soberanis now faces 21 counts of sexual exploitation of a minor, all of which are second-degree felonies. 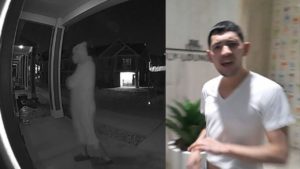 An investigation of Soberanis by the Internet Crimes Against Children task force began in August 2020 after a report showed he was “distributing child sex abuse material,” according to court documents. Videos shared by Soberanis contained sexually explicit material involving children as young as three years old.

Soberanis allegedly created numerous social media accounts where he would refer people interested in child pornography to other accounts.

Investigators said they were concerned because Soberanis worked at a local mall where children were present, and when he was arrested it was discovered that he lived in a home where children visit. During the arrest, an officer wrote that Soberanis’ body language “became more nervous, and his eyes became very wide.”

A search of a cell phone owned by Soberanis found more child pornography.

In 2018, Soberanis was arrested for allegedly exposing himself to a 9-year-old in a bathroom at the Shops of South Town in Sandy. He was charged with assault, lewdness involving a child, and violent offense committed in the presence of a child. All charges were dismissed without prejudice.

In June 2021, he was arrested for allegedly sexually assaulting a 5-year-old in a bathroom stall at the Lehi Legacy Center and was charged with voyeurism, lewdness involving a child and unlawful detention of a child. Those charges were also dismissed without prejudice.

Earlier this year, Soberanis was arrested on Feb. 3 and faces two charges of voyeurism after surveillance video showed him looking through the windows of a Lehi home. In the police report, an officer wrote, “Based on previous history involving Jonathan, it is apparent that he is dangerous to children.”

This story was originally published March 23, 2022, by KSTU in Salt Lake City, an E.W. Scripps Company.