TAYLORSVILLE, Utah (KSTU) — A Utah woman has been charged with causing the death of a 6-month-old child who she was babysitting at the time.

On Oct. 13, paramedics responded to 47-year-old Paulina Carmona-Simbron’s home in Taylorsville after one of her family members called 911 to report that the baby girl — identified as Aitana Ampudia Aguilar — was unresponsive and not breathing. 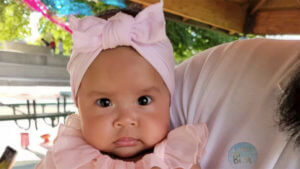 According to charging documents, paramedics told police officers when they arrived that the infant would likely not survive. Initially, there were “no obvious signs of foul play that were visible that led EMS to believe that the infant’s unresponsiveness would be a result of physical injuries,” the report states.

However, a doctor at Primary Children’s Hospital determined later through a scan that the child suffered a severe brain injury, which, according to the charges, “was an immediate result of severe and forceful motions … consistent to Shaken Baby Syndrome.”

Police interviewed Carmona-Simbron and said they gave her a doll to demonstrate how she cared for the baby. Officers said she handled the doll “in a fashion that resembled violent and harsh movement.” Later, she demonstrated how she would hold and rock the child, and police said she did so without supporting the doll’s head. This caused concern because they said the victim likely would not have been strong enough to support her own head.

Carmona-Simbron was arrested on Oct. 14 for “child abuse homicide,” then charged Friday with first-degree felony murder. She was ordered to be held without bail.

This story was originally published Oct. 23, 2022 by KSTU in Salt Lake City, an E.W. Scripps Company.