ROY, Utah — A victim of an attempted abduction in Roy is sharing her story hoping it gives others the courage to fight back against their attackers.

Friday night, 10-year-old Journey Brown rode her bike to a convenience store near her home to buy a treat. 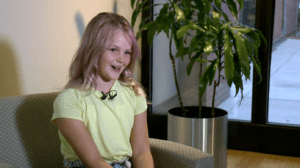 While she was waiting to pay for her items, she noticed something didn’t feel right.

“I just got a strange feeling so I tried to stay behind him so I wouldn’t get too close,” Journey said.

Journey’s intuition about the stranger inside the store turned out to be very real.

As she was riding her bike home, she says he tried to attack her.

“He just grabbed my neck like this,” Journey said as she demonstrated a choke hold type move the suspect tried to make.

The fifth-grade student screamed and managed to escape. She rode her bike as fast as she could and arrived home within 15 seconds.

“She said, ‘someone tried to hurt me,’” Journey’s mother, Lauren Brown said. “Hearing those words from your baby is probably the scariest feeling.”

Thanks to Journey’s detailed description and surveillance video from the convenience store, investigators were led to the home of Richard Rodney Palmer, a registered sex offender.

Detectives say he confessed to the crime and admitted he intended to sexually assault the child.

Journey believes she was able to escape this incident safely thanks to her quick thinking and training to react in situations like this.

“My first instinct was to fight and not do anything else but fight,” Journey said.

“We taught them to scream and fight and yell. I don’t care if they have a gun, and they say they are going to shoot you. You scream, because as soon as you’re gone, you’re gone,” Lauren said.

The suspect is currently being held without bail.

The Brown family hopes he will be off the streets for a long time so he can’t attempt to hurt other children.