PHILADELPHIA (AP) — Philadelphia’s district attorney vowed Wednesday to make his own decision about whether to charge two young officers in the shooting death of Walter Wallace Jr. and not to rely solely on the police investigation.

Police Commissioner Danielle Outlaw identified the two patrol officers who opened fire on Wallace as Officers Sean Matarazzo, 25, and Thomas Munz, 26. Neither had more than three years of experience in the department.

Outlaw also pledged to put reforms in place by late next year that includes more deescalation training for police and better coordination with mental health specialists.

The evidence shows that Wallace, a 27-year-old Black man, was killed outside his house within one minute of the officers’ arrival, Krasner said. Family members have said they called 911 to seek help as he went through a mental health crisis. Police said he ignored commands to drop a knife when they fatally shot him. 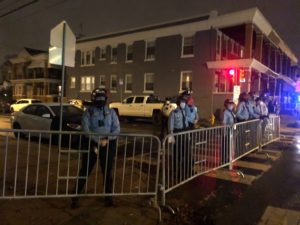 Police set up barricades at 56th and Pine Street after the fatal shooting of Walter Wallace Jr. by police on Monday, Oct. 26, 2020 in Philadelphia. (Jessica Griffin/The Philadelphia Inquirer via AP)

The pair of police body cam videos shows police repeatedly yelling at Wallace to put a knife down and ordering bystanders to move. Wallace rushes between cars into a street where the two officers have their guns drawn. Several shots are fired, and Wallace falls on his front.

A woman rushes to the man, screaming and crying, and throws an object at one of the officers. Bystanders turn the man over, and the video shows Wallace lying on his black with blood on his chest and a brief flash of a large knife lying on the pavement next to him.

The local Fraternal Order of Police said it welcomed the release of the evidence, and decried Mayor Jim Kenney’s use of the term “police violence” to describe it. 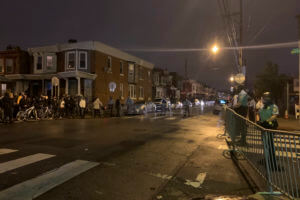 Police set up barricades at 55th and Pine Street after the fatal shooting of Walter Wallace Jr. by police on Monday, Oct. 26, 2020 in Philadelphia. (Jessica Griffin/The Philadelphia Inquirer via AP)

“The real violence was perpetrated by a knife-wielding man, who confronted our police officers,” President John McNesby said in a statement. “These officers followed their training and police department policy. It’s completely inappropriate that these officers continue to be vilified for doing their job,”

An internal affairs investigation within the police department was also underway, Outlaw said. The Fraternal Order of Police said its lawyers were representing the officers.

Black pastors joined city leaders at a news conference Wednesday in pleading with protesters and others outraged by the police killing to remain peaceful.

The pastors said Wallace’s family does not want his memory marred by more of the store break-ins and violence that broke out in the days following his Oct. 26 death.

More than 90 people have been arrested and about 50 police officers injured in clashes with protesters and vandals, including the 1,000 or so who suddenly swarmed a shopping center the following night, breaking windows and stealing merchandise. That scene erupted on the other side of the city, miles from Wallace’ neighborhood, where protests were underway.

A lawyer for the family has said they do not want the officers charged with murder because they believe they lacked the proper training and equipment.

“When you come to a scene where somebody is in a mental crisis, and the only tool you have to deal with it is a gun … where are the proper tools for the job?” lawyer Shaka Johnson said last week.