NEW YORK (AP) — An attorney for Harvey Weinstein said on Tuesday that her client is not without sin — but he’s also not “a rapist.” 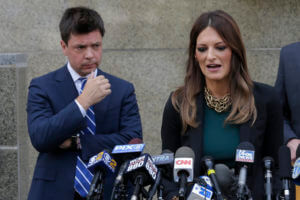 Donna Rotunno, speaking on “CBS This Morning,” said she feels strongly that the evidence will exonerate the movie mogul of any criminal wrongdoing.

Weinstein is scheduled to go to trial in January on charges alleging he raped an unidentified woman in his Manhattan hotel room in 2013 and performed a forcible sex act on a different woman in 2006. He denies all accusations of non-consensual sex.

The trial will occur amid the backdrop of the #MeToo movement, which was fueled by dozens of allegations of sexual misconduct against Weinstein. 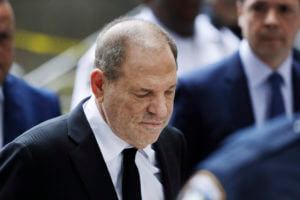 In this Aug. 26, 2019, photo, Harvey Weinstein arrives in court in New York. A new book by The New York Times reporters who uncovered sexual misconduct accusations against Weinstein includes new details on the movie mogul’s attempts to stop the newspaper from publishing the story. (AP Photo/Mark Lennihan)

“I’m not here to say he was not guilty of committing sins,” she said. However, “I don’t think he’s a rapist.”

“I think in many ways there are good things about #MeToo,” the lawyer said. However, the empowerment movement “allows the court of public opinion to take over the narrative” in a way that can’t be corrected or challenged, which can result in the accused being “stripped of your rights.”

“It’s really about making sure those issues don’t cloud our ability to pick a fair jury,” she said.

No matter happens at trial, she said, Weinstein “will pay the biggest price there is,” because his life is ruined.