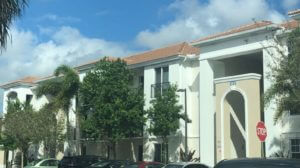 A body was discovered inside this apartment building at Blu Atlantic, Jan. 3, 2023, near Delray Beach, Fla. (Photo by: Dave Bohman/WPTV)

After deputies got a master key and entered the apartment, they found a woman dead inside.

The condition of her body led deputies to believe she was the victim of a homicide, Barbera said. An autopsy will determine her cause of death.

Barbera said no additional information about a suspect or motive is known at this time.

One resident told WPTV when he looked outside Monday afternoon, he saw several deputies going in and out of the apartment building.

“I asked some officer. He said they can’t talk about it,” Parris Washington, who lives in the same building at the Blu Atlantic apartments off Sims Road, said.

Like many of his neighbors, Washington wants to know more about the circumstances surrounding the death of the woman he and other tenants describe as friendly.

“This is the first time I’ve seen something happen in this complex,” Washington said. “There’s isolated things down the road, maybe, down the avenue, but that’s the first thing I’ve heard here.”

Anyone with information that can help detectives should call Crime Stoppers of Palm Beach County at 800-458-TIPS.

Yesterday, deputies in Delray Beach discovered an adult female deceased in an apartment in the 5600 block of Nespa Way. Cause of death appears to be homicide. No suspect information or motive at this time. If you have any info, please contact Crime Stoppers at 1-800-458-TIPS. pic.twitter.com/orM54OWC21

This story was originally published Jan. 3, 2022 by WPTV in West Palm Beach, an E.W. Scripps Company.