SHREVEPORT,La. (AP) — A woman accused of throwing two of her children into a Louisiana lake has been extradited from Texas to Louisiana, where she faces a murder charge that could send her to jail for life.

Ureka Black, 32, of Shreveport, is accused of throwing her 5-year-old and 8-month-old sons into Cross Lake on Friday. The baby died. 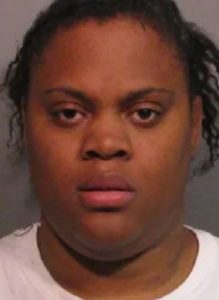 Black was arrested Friday at a truck stop in Waskom, Texas. She was extradited over the weekend and booked into the Shreveport City Jail on Sunday on charges of second-degree murder and attempted second-degree murder, news agencies reported. If convicted on the murder charge, she would face a mandatory life sentence.

She is likely to have her first court appearance via video on Tuesday, said Caddo Parish district attorney’s spokesman John Andrew Prime. It was unclear if she had an attorney who could speak for her.
Black has been arrested at least 11 times over the past 15 years in Caddo and neighboring Bossier parishes, but her sentences have been minimal, KTBS-TV reported.

Her record includes numerous notations about orders to attend counseling, anger management and parenting classes, but she either ignored the orders or quit after one or two classes, the station said.
The longest sentence was five years, after she pleaded guilty in September 2010 to arson and was found to have violated probation two years later in connection with other arrests. Police said she had her daughter, then 2 years old, with her when she broke into her ex-boyfriend’s home and set fire to the floor.

The prison term originally was suspended and Black was sentenced to 30 days in jail, but the court reimposed the longer term in October 2012. A court transcript indicated Black’s daughter was then in foster care.

Her most recent arrest, in April 2016, was on charges of prostitution and human trafficking. Black pleaded guilty in May 2017 in Caddo Parish to a reduced charge of pandering, testifying when she was sentenced that she had encouraged a 17-year-old girl to enter prostitution. She was sentenced to two years in prison and given credit for time served.

Black also wanted to know if staying out until 4 a.m. would violate her probation and became “very argumentative” about such limits, he wrote.