MONROE, Ohio (WCPO) — An Ohio woman was arrested after being charged related to an incident where a fetus was found in a motel trash can.

Rebecca Houck, 31, was indicted in March 2021 by a Warren County grand jury on a charge of gross abuse of a corpse, a fifth-degree felony. The charge stems from an Oct. 9, 2020, incident in which the fetus was found dead at Motel 75 in Monroe, Ohio. 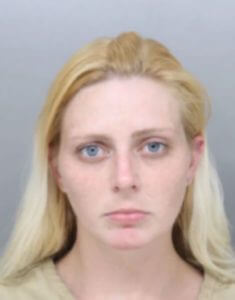 The fetus was 23 to 27 weeks, according to the Warren County Coroner’s Office report — not as far along as first believed. But, the evidence could not prove the girl was born alive.

“It was still considered to be viable, but you didn’t have evidence of a live birth,” said Warren County Prosecutor David Fornshell at the time of the indictment. “Based on our evidence, we believe she intentionally ordered a drug online to essentially induce an abortion.”

That is not a criminal offense if the mother does it, even if it was done post-viability, he said.

“The only crime we had was dumping the baby girl in the trash can,” Fornshell said.

Houck’s case was assigned to a Warren County Common Pleas Judge and a warrant was issued for her arrest. She was not found until her arrest June 1 in Hamilton on a charge of possession of drug abuse instruments, according to Hamilton County court records.

Assistant Warren County Prosecutor Steven Knippen said the Hamilton County case will be completed before she is returned to Warren County for her case there.

This story was originally published June 8, 2022 by WCPO in Cincinnati, an E.W. Scripps Company.