MORGAN COUNTY, Colo. (KMGH) — A woman was arrested and faces multiple charges after she allegedly stole her two biological children, whom she does not have custody of, from their grandmother’s home in Morgan County, Colorado and then crashed her car on an interstate.

Around 5:40 a.m. Monday, the Morgan County Sheriff’s Office responded to a call from a grandmother who reported that her two grandchildren, 5 and 7 years old, had been taken from her home during the night. She said she has guardianship over the children. 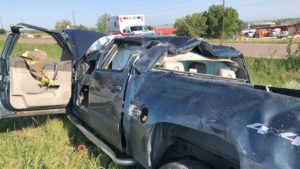 Through a subsequent investigation, the sheriff’s office found that the two young boys’ biological mother, 30-year-old Juanita J. Morales, had taken them from the home sometime after 2 a.m. She does not have custody of the children due to court order, according to the sheriff’s office.

Investigators also determined that a 2012 Chevrolet Silverado had been stolen from the home.

Along with the Colorado Bureau of Investigation, the Morgan County Sheriff’s Office was about to disseminate an Amber Alert when they received word of a crash involving a pickup truck that matched the description of the stolen one. 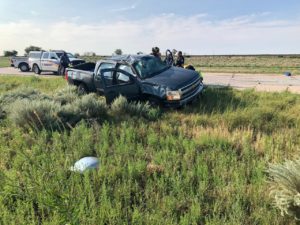 The crash occurred on Interstate 76, according to the sheriff’s office.

When deputies arrived at the scene, they confirmed it was the same pickup. It is not yet clear if any other vehicles were involved in the crash.

Morales and the two boys were all transported to Saint Elizabeth Hospital in Fort Morgan. The children had injuries that were not life-threatening and they were released to family.

Morales remains in custody and is receiving medical treatment. Once she is released, she will be transferred to Morgan County Jail. The sheriff’s office said she faces arrest warrants for failures to appear in various courts, plus new charges of first-degree kidnapping, first-degree burglary, first-degree criminal trespass, motor vehicle theft, identity theft, two counts of child abuse, and two counts of reckless endangerment. Her bond was set at $100,000.

This story was originally published August 1, 2022 by KMGH in Denver, an E.W. Scripps Company.