NOBLESVILLE, Ind. (WRTV) — A woman accused of a 2021 homicide in which a man was strangled and drugged has been found guilty of murder and related charges. 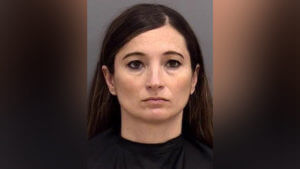 Littlefield is one of three people now convicted in the killing of Francis Kelley, who police found dead Jan. 18, 2021, inside his Carmel home.

But some charges against Littlefield’s co-defendants, Logan Runyon and Robert Walker, were dropped after they both pleaded guilty to counts of conspiracy.

All three defendants were arrested as a result of a criminal investigation into Kelley’s death.

An autopsy determined Kelley’s cause of death was asphyxia due to strangulation. A toxicology test also found Kelley had fentanyl in his system at the time of his death, according to court documents.

Littlefield and Runyon put fentanyl in Kelley’s oatmeal inside the fridge, documents allege.

Around 1:30 p.m. on Jan. 15, Kelley texted Littlefield and asked if she did something “to the oatmeal that was in my fridge,” according to court documents. “What the actual f**k are you talking about????” Littlefield responded.

“You were in my fridge last night and it tasted funny after a couple of bites and now I am light headed,” Kelley said in a text message to Littlefield. He said he just got off the phone and had to ask them to “repeat things basic things.”

Littlefield sent two other messages that went unread by Kelley. The last email he sent on his work computer was at 1:56 p.m., which, his employer said, was “highly unusual” for him, according to court documents.

During the investigation, detectives learned Littlefield and Runyon went inside Kelley’s home on Jan. 15 and found he still had a pulse and was on the kitchen floor, according to court documents. Littlefield then grabbed his “favorite tie,” tried to strangle Kelley, and smashed his head on the floor. They then left Kelley on the floor and left.

Kelley was found dead on a couch inside the home on Jan. 18, according to court documents.

Detectives later learned Littlefield paid Walker $2,500 to find someone to kill Kelley, but ended up spending the money on other items, according to court documents.

Littlefield is scheduled to appear for a sentencing hearing Oct. 7 at Hamilton Superior Court.

This story was originally published Aug. 24 by WRTV in Indianapolis, an E.W. Scripps Company.