LEAVENWORTH, Kan. (AP) — A 44-year-old Kansas City woman has admitted that she had a role in the attempted murder of an inmate at the Lansing Correctional Facility.

Renee Johnson-Fritz, of Kansas City, Missouri, pleaded Friday to solicitation of capital murder. She was scheduled to go to trial this week. 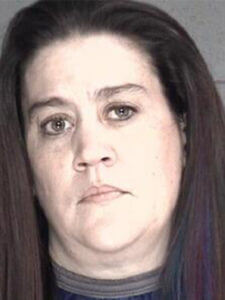 Prosecutors said her husband, Frederick Fritz, who is a state prison inmate, sent his wife a letter demanding the inmate’s death and she forwarded it to another inmate at Lansing.

Witnesses at a preliminary hearing in March said Frederick Fritz is a leader in the Aryan Brotherhood of Kansas, the Leavenworth Times reported.

The targeted inmate was attacked in April 2019 but survived.

Frederick Fritz is also charged with solicitation of capital murder. He is scheduled to go to trial in April.

Andrew Hogue, the inmate who attacked the victim, is charged with attempted capital murder. His trial is also scheduled for April.

Sentencing for Johnson-Fritz is scheduled for Dec. 1. She remains in custody at the Leavenworth County Jail.