SAN FRANCISCO (AP) — The woman whose DNA from a sexual assault case was used by San Francisco police to arrest her in an unrelated property crime plans to sue the city, her attorney said Thursday.

The woman has filed notice of a possible federal lawsuit because she feels betrayed by police officers who broke her trust and violated her rights, said her attorney, Adante Pointer. 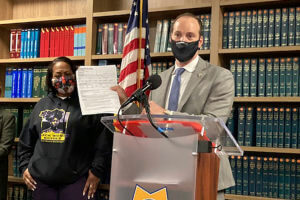 FILE – San Francisco District Attorney Chesa Boudin holds a report during a news conference in San Francisco on Tuesday, Feb. 15, 2022. The woman whose DNA from a sexual assault case was used by San Francisco police to arrest her in an unrelated property crime plans to sue the city. Attorney Adante Pointer said Thursday, March 10, 2022, he filed notice of a possible federal lawsuit on the woman’s behalf. Boudin said in February that the woman was identified based on DNA collected from her in a 2016 domestic violence and sexual assault case. (AP Photo/Olga R. Rodrigues, File)

Pointer declined to identify his client. The Associated Press generally does not name people who say they have been sexually assaulted unless they choose to be named.

The woman was tied to a burglary in late 2021 during a search of a San Francisco Police Department crime lab database, according to District Attorney Chesa Boudin, who said last month that the match came from DNA collected from her as part of a 2016 domestic violence and sexual assault case.

“This is the ultimate betrayal and re-victimization at the hands of authorities and people that she sought help and protection from,” Pointer said.

Boudin said he dropped felony property crime charges against the woman after becoming aware of a report, found in evidence of the property crime case, that referred to a DNA sample collected from her during the 2016 rape investigation.

The revelation prompted a national outcry from law enforcement, legal experts, lawmakers and advocates and led San Francisco Police Chief Bill Scott to institute new guidelines so that victim DNA would no longer be used in unrelated investigations.

He said at a police commission meeting last week that he’s discovered 17 crime victim profiles, 11 of them from rape kits, that were matched using a crime victims database during unrelated investigations, KTVU-TV reported. Scott said he believes the only arrest was that of the woman planning to sue the city.

The department’s crime lab stopped the practice shortly after receiving a complaint from the district attorney’s office and formally changed its operating procedure, Scott said.

California allows local law enforcement crime labs to operate their own forensic databases that are separate from federal and state databases. The law also lets municipal labs perform forensic analysis, including DNA profiling, using those databases — without regulation by the state or others.

Pointer declined to make the woman available for an interview with the AP. She told local media that she felt “violated again” after finding out the DNA collected as part of a sexual abuse case had been used against her.

“It was a slap in the face,” she told KTVU-TV. “It’s just unbelievable. I’m still having a hard time wrapping my head around this right now. It’s just not a good feeling.”