DETROIT (AP) — A man charged in an alleged plot to kidnap Michigan Gov. Gretchen Whitmer has agreed to plead guilty, according to documents filed Monday, giving prosecutors another insider who could be a key witness at a March trial.

Kaleb Franks said he would join Ty Garbin as the second person to admit guilt in a scheme to snatch the Democratic governor before FBI agents arrested them in October 2020. The decision leaves four other men to face trial. 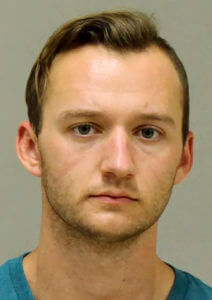 FILE – In a photo provided by the Kent County Sheriff, Kaleb Franks is shown in a booking photo. Franks, charged in an alleged plot to kidnap Michigan Gov. Gretchen Whitmer has agreed to plead guilty, according to documents filed Monday, Jan. 7, 2022, leaving four people to face trial in March. Franks said he willfully conspired with five other men to kidnap the Democratic governor before FBI agents stepped in and arrested the group in October 2020. The government said they wanted to kidnap Whitmer because of their disgust over COVID-19 restrictions. (Kent County Sheriff via AP File)

The government said the group wanted to kidnap Whitmer because of disgust over her COVID-19 restrictions.

Franks signed a document agreeing to plead guilty as charged, admitting he “was not entrapped or induced to commit any crimes” by undercover agents or informants. Garbin pleaded guilty in 2021 and was sentenced to slightly more than six years in prison.

Franks acknowledged that he was deeply involved in the plot, which included outdoor training with firearms in Wisconsin and Michigan and scouting Whitmer’s second home in northern Michigan.

In August 2020, less than two months before their arrest, Franks said he and a co-defendant “discussed their frustration with people who advocated anti-government action but were unwilling to use force themselves.”

The plea deal suggests Franks, like Garbin, could offer crucial testimony against the remaining defendants at the March 8 trial in Grand Rapids. While there is no agreement on the length of his prison sentence, Franks could be rewarded if he “materially and substantially assists” the government.

Brian Legghio, a criminal defense lawyer who is not involved in the trial, said Franks’ cooperation can strengthen the government’s case.

“It makes it more difficult for the defense to successfully argue entrapment,” Legghio said. “Jurors will believe people who plead guilty, even if the defense team is effective at cross-examining them. They can be a very powerful tool in explaining that the conspiracy and illegal activities were genuinely undertaken.”

Franks’ decision to plead guilty followed key rulings in the government’s favor about trial evidence. U.S. District Judge Robert Jonker said he wouldn’t allow the defense to use more than 250 out-of-court statements to try to bolster an entrapment argument. He said the remarks would be hearsay unless the men sat in the witness box and were cross-examined.

Evidence collected by investigators includes hours of secretly recorded conversations. Assistant U.S. Attorney Nils Kessler recently quoted Adam Fox as telling an informant: “I want to have the governor hog-tied, laid out on a table while we all pose around like we just made the world’s biggest” drug bust.

Besides Fox, who is described as a ringleader, the remaining defendants are Barry Croft Jr., Daniel Harris and Brandon Caserta.

When the kidnapping case was filed in 2020, it added even more heat to the final weeks of a tumultuous election season.

Whitmer pinned some blame on then-President Donald Trump, saying his refusal to denounce far-right groups had inspired extremists across the country. Trump had earlier urged supporters to “LIBERATE” Michigan and two other states led by Democratic governors from stay-at-home mandates.