The trial witness, who has said she’s using the pseudonym “Jane” to protect her 22-year acting career, had testified in graphic detail on Tuesday about the alleged encounters in the 1990s, portraying Maxwell as an active participant.

During a methodical cross examination, defense attorney Laura Menninger confronted the woman with FBI documents from 2019 and 2020, saying she had told the government her memory was foggy on whether Maxwell was present when Epstein molested her and on whether she ever touched her. 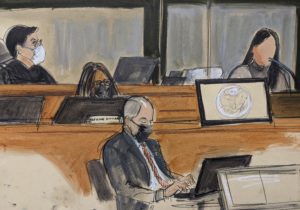 In this courtroom sketch, Judge Alison Nathan, far left, listens as a witness using the pseudonym “Jane” testifies during Ghislaine Maxwell’s trial, Tuesday Nov. 30, 2021, in New York. The woman testified that she had repeated sexual contact with disgraced financier Jeffrey Epstein when she 14 and that Maxwell was there when it happened. (Elizabeth Williams via AP)

Other documents claimed she said that no abuse occurred during a visit to Epstein’s ranch in New Mexico. That contradicted her testimony about alleged encounters with him there that she said made “my heart sink into my stomach.”

The witness denied ever changing her story. She challenged the accuracy of the documents, saying her statements were never recorded.

“This was just someone jotting down notes. … A lot of these are not correct,” she said.

At another point, she responded, “I don’t recall saying what’s written here.”

She did not dispute other documents saying she had named several “model types” and other women she said witnessed participating in group massages with Epstein. She also confirmed telling the FBI she once flew on a private jet with Britain’s Prince Andrew.

Maxwell, 59, has pleaded not guilty to charges that prosecutors say show that she and Epstein were “partners in crime.” The defense has countered by claiming she’s being made a scapegoat for 66-year-old Epstein, who killed himself in his Manhattan jail cell in 2019 as he awaited his own sex trafficking trial. 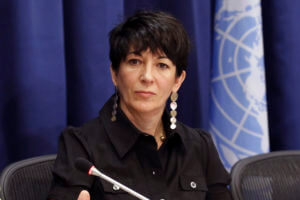 FILE — Ghislaine Maxwell, founder of the TerraMar Project, attends a press conference on the Issue of Oceans in Sustainable Development Goals, at United Nations headquarters, June 25, 2013. Maxwell spent the first half of her life with her father, a rags-to-riches billionaire who looted his companies’ pension funds before dying a mysterious death. She spent the second with another tycoon, Jeffrey Epstein, who died while charged with sexually abusing teenage girls. Now, after a life of both scandal and luxury, Maxwell’s next act will be decided by a U.S. trial.(United Nations Photo/Rick Bajornas via AP, File)

On Tuesday, the accuser described numerous sexual encounters with Maxwell and Epstein that began in 1994 and continued through 1997. When recounting the first time she was abused by Epstein, she said she was “frozen in fear.”

On cross examination, the defense has also attacked the witness’s credibility by asking why she waited over 20 years to report the alleged abuse by Maxwell to law enforcement. She said that she mostly avoided the subject for years because it was too painful.

The woman is the first of four alleged victims slated to testify against Maxwell at a trial expected to last about six weeks.